Masika Kalysha Is Done With Cheating Boyfriend! Stay Single Rather Than Dating?

By LRU Writer | On: February 12, 2018
Masika Kalysha Is Done With Cheating Boyfriend! Stay Single Rather Than Dating? The reality star, Masika Kalysha was in love with her then-boyfriend, Fatty Wap, who also happens to be the father of her daughter, Khari. We say then-boyfriend because Wap cheated on Kalysha. And there is more drama to the story. 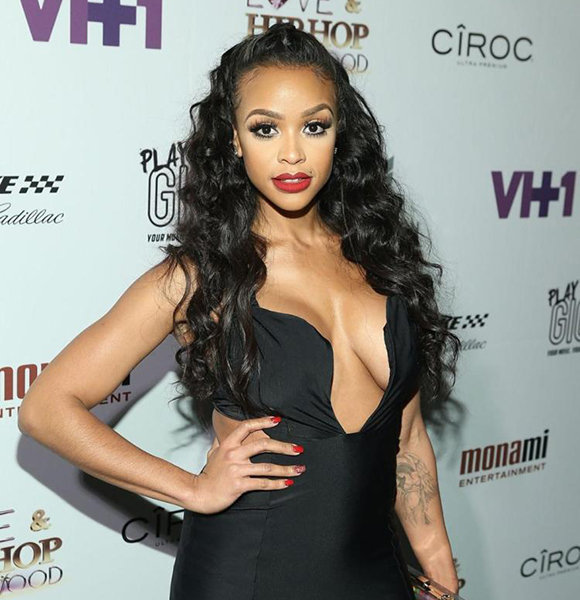 The reality star, Masika Kalysha learned the essence of the quote, "Being single is better than being in a wrong relationship," the hard way, as her lover turned out to be treacherous.

She was in love with her then-boyfriend, Fatty Wap, who also happens to be the father of her daughter, Khari. We say then-boyfriend because Wap cheated on Kalysha, but that's not all!

Well, if you are curious to know about her distorted love affair and her current dating status, dig in!

Masika Kalysha Done With Dating After Her Cheating Boyfriend?

The reality star, Masika Kalyshsa rose to fame after appearing in the hit reality series Love & Hip-Hop: Hollywood. At the moment, she was dating the rapper Fatty Wap, and the two are parents to the beautiful baby girl, Khari.

Masika Kalysha announced her pregnancy to the public when she was running on six months by sharing a picture of her baby bump on social media. Masika strikes a pose for her pregnancy photo shoot (Usmagazine.com)

When Masika announced her pregnancy, Fatty, on the other hand, denied fathering the child.

“I wasn’t just no random dude in the club. You know what I’m saying’? She knew I was gon’ be there.Congratulations to her and whoever is the [father].”

After being subjected to the false accusation, Masika defended herself:

I tried to demand him taking a paternity test. He doesn’t want to take one. I asked him seven times, ‘Will you just volunteer and do it?’ He refuses.”

Despite their differences and issues, the duo welcomed their daughter back in 2016.The family of three were working out fine and was giving out some serious family goals out to the world.

But their relationship took an ugly turn when another reality star, Alexis Skyy announced that she was pregnant with Fatty Wap's child. Take a look at Marisa's reaction after Alexis revealed her pregnancy news.

The rivalry between the two just kept getting ugly. After finding out the truth about Fatty, Alexis broke up with the father of her child. Fatty's infidelity did not end there. He later cheated on Alexis as well, and Marisa could not help but show off her smugness on social media.

Meanwhile, Marisa was making her way in the news after being spotted with Tory Lonez in Coachella. The spark of romance between the two ignited after Tory uploaded a video of the two on his Instagram.

But the rumor was put to rest when she got romantically linked to the NBA Baller, Shabazz Muhammad. The duo did not speak on that matter as Shabazz was already in a relationship with another girl and was cheating on her with Kalysha.

Furthermore, the reality star yet again made it to the news after she was caught casually flirting with Jeremih. The story got its spark after Jeremih made a comment on Marisa's picture and she replied with a teasing comment that made the fans wonder if the two has something going on between them.

But as usual, neither Marisa nor Jeremih confronted anything on that matter.

Kalysha somehow manages to be a topic of new rumors most of the time, and we wonder what's in store for Kalysha in 2018!

Stay with us for the emerging updates on Masika Kalysha!