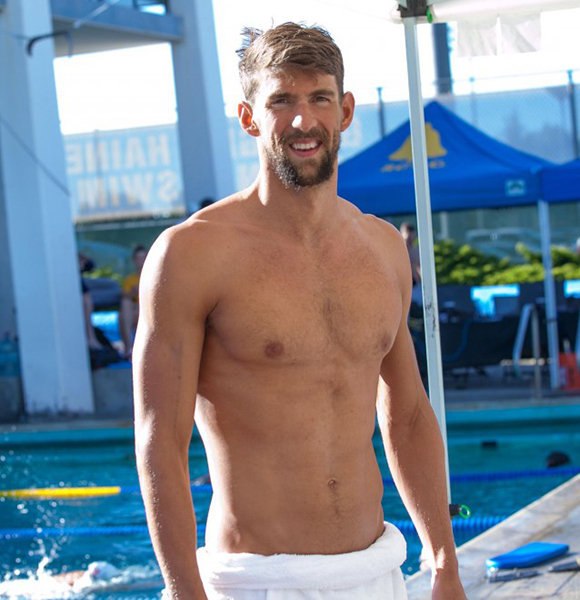 The Olympic Gold Medalist swimmer - age 33 - welcomed another baby with wife, Nicole Michele Phelps. The pair's third son Maverick Nicolas Phelps came into the world on 9th September 2019. During the auspicious moment, he and his partner were also joined by their two sons Boomer Phelps (born in 2016) and Beckett Richard Phelps (born in 2018).

His baby boys' excitement was apparent from the picture the player's wife had shared among her fans. In the photo, his eldest son Boomer was seen holding his baby brother gently in his arms. Likewise, his middle son Becketts too was seen grabbing the opportunity to hold Maverick up close while sitting in his mommy's lap. The athlete's life partner even revealed her healthy baby's measurement while sharing a memorable moment among her well-wishers. Through her Instagram handle, she quoted,

We welcomed Maverick Nicolas Phelps into the world on 9/9/19 at 36 weeks and 2 days. Our lil big man was 6lb 5o and 20 (inches). He instantly has stolen all of our hearts and keeps me an ecstatic mommy of boys. I can’t wait to walk this journey surrounded by my men. #familyof5.

The pair were eagerly waiting for this moment for a few months. The world champion had announced the happy news of his wife's pregnancy via Instagram on 1st April 2019. Interestingly, four days before the birth of his third son, his wife had undergone a beautiful pregnancy shoot. With the revealing image, Michael had added,

For now, the pair are being showered with good wishes, and it's evident that their happiness has crossed boundaries.

Michael was born on 30th June 1985 to Fred Phelps and Debbie Phelps. His father was a professional state trooper.

Surprisingly, the most successful swimmer in history, Michael was first afraid of dipping his feet into the water. But his siblings, Whitney Phelps, and Hilary Phelps were into swimming. So, as their little brother, he got inspired to overcome his fear of water.

Poor Michael had just started to be a swimmer when he got diagnosed with Attention deficit hyperactivity disorder, (a condition where the person finds it difficult to concentrate). But, his parents - especially his mother - stood by him and helped him to deal with the state.

The hard work and dedication of the swimmer paid off when he became the youngest male to debut in the 2000 Olympic games at the age of 15. While concentrating on his game, he did manage to complete his high school education. But, he didn’t get a degree even after attending the University of Michigan.

Well, he compensated his left out education by giving the best on his sport; he continued to wow the world at the Olympic stage. His best performance was in the 2008 Olympics where he won eight gold medal, the highest win by any Olympian in the history.

Now, a retired swimmer, the five-time Olympian has a total of 28 medals including 23 golds, three silvers and two bronzes.

What Is His Height?

Related:- 2 In A Row! Nicole Johnson Reveals Being Pregnant In An Adorable Post With Her Baby Girl

By living a disciplined life and emerging as the best Olympian of all time, the American boasts a net worth of $55 million. His earning comes from playing the sport along with numerous high profile brand deals.