By LRU Writer | On: May 22, 2018
American actor Okieriete Onaodowan has impacted the acting industry by his performances in Broadway shows. Often called a Gentle Giant, he has shown his softer side by being a loyal and committed boyfriend. He has a flaunting relationship and calls girlfriend his motivation. 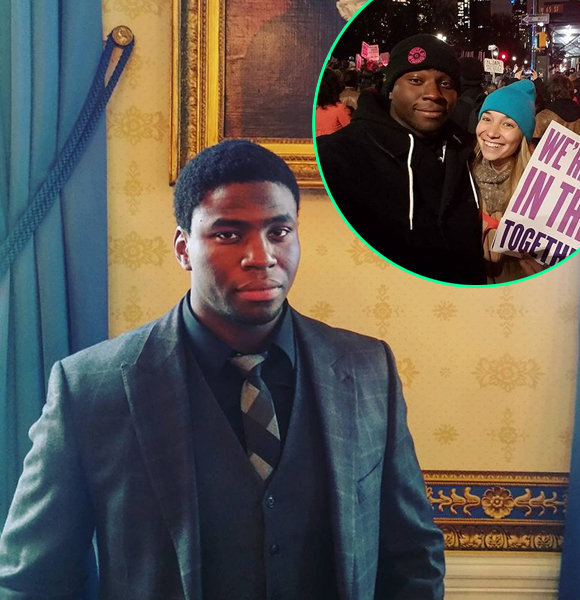 American actor Okieriete Onaodowan has impacted the acting industry by his performances in Broadway shows.

Often called a Gentle Giant, he has shown his softer side by being a loyal and committed boyfriend. He has a flaunting relationship and calls girlfriend his motivation.

Okieriete, who is a gay supporter, has been in a committed relationship with The Deuce actress Alyssa Kempinski. Although he had not disclosed when they first met, the news of their dating surfaced in the media after Okieriete took Alyssa to a romantic getaway in San Diego.

The six-feet heightened star posted a picture from the beach on 11 October 2014, in which the couple could be seen taking a walk in the beautiful shore. Alyssa later shared another picture on 1st November 2014, in which she talked about another romantic week of the pair.

Further, on 19 December 2014, the 30-year-old shared a picture of his topless body-painted girlfriend and a cat. He captioned the picture as his motivation and wrote,

On one occasion, The Incredible Oak also joked about his hypothetical married life with Alyssa. In a tweet posted on 9 October 2016, he jokingly wrote about quitting his job and getting a second mortgage on his home. Further, he requested his fans and followers not to tell his wife about Okieriete being unemployed.

In the recent years, the couple's love has not diminished, and the two can be seen attending different events together. On 14 November 2016, the pair attended the Broadway premiere of Natasha, Pierre & The Great Comet of 1812 at the Imperial Theatre in New York City.

The couple also shared their 2017 Valentine's Day together, and Okieriete shared a picture to mark the occasion. In the photo, where Alyssa can be seen holding a placard titled, "We're All In This Together"; Okieriete dedicated a romantic message to her,

#HappyValentinesDay to this mush. She has my heart and reminds me everyday that we are all in this together. She is (most times) the perfect partner in crime. #MyNameisOak #LoveWins#LoveIsWorkToo #nomanisanisland#KatyPerry

Recently in June 2017, the lovebirds walked the Red Carpet at the Tony Awards, where the two looked happy and enjoyed each other's company.

Moreover, the couple went back to San Diego, the place where they took their first trip. Okieriete shared a picture on 3rd October 2017, in which he could be seen posing with his flawless girlfriend. As of 2018, the couple has kept their dating life low-profile. However, it seems like the pace at which their relationship is moving forward; they may not take much time to change their status from lovers to husband and wife.

Okieriete was raised in New Jersey by his Nigerian immigrant parents. He graduated from the West Orange High School in 2005. A football player in high school, he fractured his femur while horsing with friends. He could not walk for six months. And after recovery, he left football to pursue acting in theatres. Okieriete also attended Rutgers' University for a year but later left due to his acting jobs.

Talking about his family, the Thanks For Sharing actor is close to his mother and siblings, although not much is known about his father. His mother, who previously worked as a nurse is the subject of several of Okieriete's post on social media.

On 13 May 2018, he dedicated a tweet to his mother, in which he mentioned his unconditional love for his mother. He wrote in the tweet,

I love my mama. More than anything. She has put so much love into me, I can't help but love those around me, just to get rid of some of it. Sometimes it feels like pressure, but that's also how diamonds are formed. #JustSaying. So if I love on you a little too hard, blame her.

The next day, Okieriete posted a picture with his mother and four siblings and wished his mother for Mother's Day.