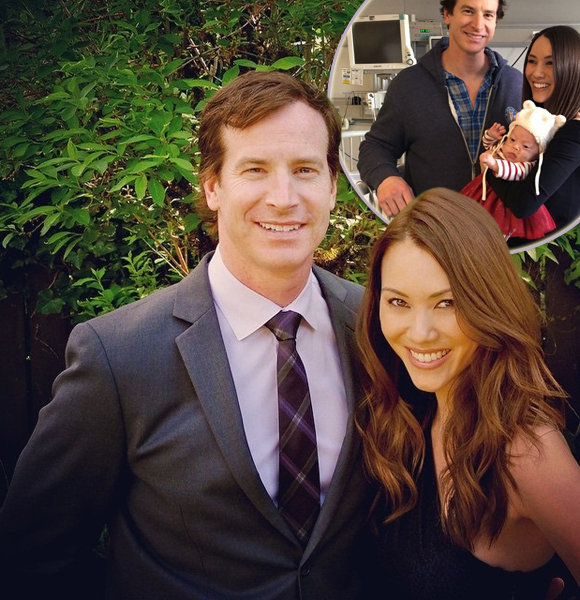 'Children's Hospital' actor Rob Huebel is a man who has accomplished a fair amount of success in his professional career. But do you know he is also a married man and a father of a prematurely born daughter?

If you did not know, well, you have come to the right place as today we shed some light on how his wife felt at their wedding.

Also, the details about their daughter's premature birth.

Rob Huebel has been married to his beautiful wife, Holly Hannula. Although the marriage date is not made public by the two, the couple is happy with one another and enjoys every moment together.

Holly Hannula is the traffic anchor for 'Today in LA' on KNBC; adding on, she shared her marriage experience and happiness in the video.

Holly Hannula talks about her and Rob Huebel's wedding

In the video, she says she is happy to get married and settle with her husband, Rob. Expressing her happiness, she shared how her marriage day was the best day of her life, where they had a lot of fun.

And months later, on September 28, 2016, the couple welcomed a baby girl named Holden Greer into their lives. Their daughter was born prematurely at 26 weeks, weighing only one lb., 15 oz.

Holden spent 117 days NICU at Cedars-Sinai, which was a tough time for the two parents.

Holly addressed this phase in her life over on her Instagram.

A week ago today was the best day of my life! On September 28, I delivered my daughter into the world. Meet Holden Greer! This sassy sweet-pea decided to make her grand entrance three months early. Today, she is in the NICU & working hard to grow bigger and bigger. While we hoped and prayed she’d keep cooking until December, my husband and I are overjoyed that she is here and our hearts are about to explode. I plan to share more about our story in the future, but right now I just want to give thanks for the birth of this little warrior. I also want to express my gratitude to all the nurses and doctors looking after Holden around the clock. She’s in the best hands and I can’t thank them enough. Any positive energy, prayers and high-fives would be so welcome! #love #nicu #preemie

Her words of gratefulness and gratitude show how much her daughter means to her!

After spending 117 days in NICU, the couple finally took Holden home in early 2017, and the elation was too much to handle for them.

In an interview, Rob explained what it was like to finally hold his child.

He said, "It’s the best feeling in the whole world. My only thought was I hope I don’t get hot tears on this baby. We were able to visit her 24/7, so my wife would go in the morning and I would go at night because we wanted her to have as much time with our child as possible."

Rob also shared how emotionally disturbed he was to see her daughter struggle in such a manner. He said, "It never got easy. It’s really, really hard and it’s emotionally really draining because every instinct that you have is to stay there and to be with your child."

He further added, "It never got easier, especially toward the end, you just want to get out of there. So it’s really hard to leave. We thought about doing a jailbreak, but ended up opting against it."

But now, the little angel is all fine and lighting up the lives of her mother and father, as per their social posts.

They look happy and adorable, and we wish them the very best for the days to come!

Stay with us for the latest updates on the star's family!