Sarah Taylor - A Woman Who Bravely Fought Her Own Demons! Keeping Married Life and Husband On Sidetrack?

By LRU Writer | On: August 15, 2017
Sarah Taylor - A Woman Who Bravely Fought Her Own Demons! Keeping Married Life and Husband On Sidetrack? She is a terrific player on the field, but off the field, she enjoys her family time. But while doing that, she has also vanquished her demons and has come out ever so stronger. So let us shed more details about her life including her battle with her anxiety, her family life, professional career and most importantly, sought for married life and the identity of her husband (if she has one). 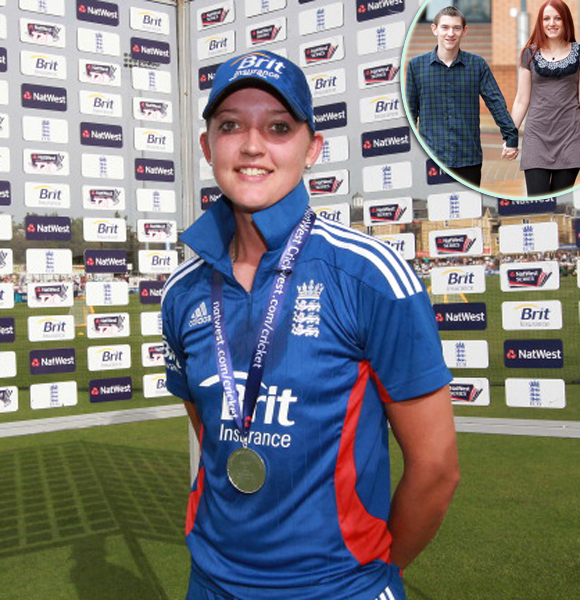 England women's team did something that their men's team has not been able to do since the inception of the great game of cricket. They won the world cup of 2017.

The men's team has lifted an ICC silverware in the past, but it was the shortest format of the game, the ICC World T20 when they beat arch rivals Australia for the title in the Caribbean.

This year, the women's team made the country proud when they beat India in the ICC Women's World Cup finals in England to lift the women's world cup. One of the key members of the team, who performed well and did justice to her talents and abilities, was their wicket-keeper/batter, Sarah Taylor.

She is a terrific player on the field and is equally successful when it comes to the family as well. But while doing that, she has also vanquished her demons, coming out ever so stronger.

Today, let us shed some light on her life, including her battle with her anxiety, her family life, professional career and most importantly, sought for married life and the identity of her husband (if she has one).

Not only did Sarah Taylor contribute with the bat, with a more than handy fifty during the semi finals clash against a formidable South African team; Sarah's stumping sent the dangerous South African batsman Trisha Chetty to the pavilion when Nat Sciver bowled, which turned the course of the match entirely.

Caption: Sarah Taylor astonishing stumping which sent Trisha Chetty of South Africa back to the pavilion during the ICC WWC 2017 Semi-Finals.

The English women team got a boost of confidence from the game against South Africa, which eventually led them to thrash India to lift the World Cup in front of a jam-packed English crowd.

But let us hit the rewind button and take you back to 2016, a year which was as tough, as it could have gotten for wicketkeeper/ batter, Sarah.

During this time last year, Sarah Taylor was obliged to take a rest from the great game which she loved after becoming overwhelmed with anxiety issues. Following the anxiety, she was unable to fly, terrified if the temperature rose above cools, and was scared by the prospect of batting.

Further, Taylor became a bag of nerves in the England women dressing room. She was debilitated so much by her condition that after the World Twenty20 in 2016, Taylor decided to take an indefinite break from the great game.

She addressed this issue in a post match interview in July 2017. She divulged,

After experiencing subjective behavioral treatment, Taylor learned systems to help her adapt to the uneasiness that was making her feel nervous and freezing her on big events.

The new group mentor, Mark Robinson, was so much awed by her recuperation that he had no hesitation to bring her back once more into his World Cup squad.

On reintroducing Sarah to the match, the coach said,

“I think that’s a testament to everybody involved, and obviously Sarah is the most important person in it. With anything you do, you put the player at the middle of everything. You always go back to that: how is it affecting Sarah? The ECB and  our support staff have worked brilliantly together in a very integrated way to make the environment the best for her to come back into.”

Sarah is indeed a pivotal member of the women's team and if words are not enough to make you believe this, then have a look at the career stats of this aspiring cricketer, who stands over 5ft 7 inches in height.

Sarah Taylor's Sought For Married Life: A Husband/Partner In LIfe?

Apart from Sarah Taylor's cricketing prowess and skills, there is no denying that she is an equally beautiful woman. But is the cricketer Sarah married to have the support of her husband?

Well, thus far, she has opted to remain mum about her marital life and has chosen not to disclose any pivotal details about her married life., which is why it remains unclear if she is married or remains single till this date,

The curiosity remains alive regarding the marital status in the heart of her fans. An example of the fans showing their curiosity was seen, when a fan tweeted on her family picture that Sarah had shared after winning this year's World Cup finals.

It's clear that the fan wanted to know if she the man was her husband in the family frame?

That is the kind of suspense she has maintained regarding her love life! She is not seen to be revealing any of it for now, but we do hope that this star cricketer shares few details about her love life soon.

Stay with us for future updates of Sarah Taylor!