By LRU Writer | On: November 11, 2018
Undoubtedly, most of the girls spent their childhood hearing fairy-tale love story and happy endings of Cinderella, Ariel, Jasmine, and Snow White. Don’t worry ladies if you're running out of patience; fairytales really do come true. Well, The Snow Queen actress, Sasha, has already met her Prince Charming and the two are living a happily after getting married. Her fairytale love story is something to envy.

Undoubtedly, most of the girls spent their childhood hearing fairy-tale love story and happy endings of Cinderella, Ariel, Jasmine, and Snow White. Some of them might be still waiting for their Prince Charming to arrive someday right in the middle of an ordinary life. Don’t worry ladies if you're running out of patience; fairytales really do come true.

Well, The Snow Queen actress, Sasha, has already met her Prince Charming and the two are living a happily after getting married. Her fairytale love story is something to envy.

Sasha started dating High School Musical star Corbin Bleu since they first met in 2011 in a grocery store. No doubt Corbin is a good actor, but no one ever took him for a romantic boyfriend.

The way he made the proposal illustrates that real-life romance can be as romantic as the reel lives. Well, the twenty-seven-year-old handsome hunk proposed his girlfriend at Disney World on 15 October 2014.

He offered her during the theme park’s fireworks show when they were standing in front of Cinderella’s Castle, presenting her a glass slipper which contained a diamond ring. Now, that is a fairytale engagement. Corbin, excited after the engagement, expressed his feeling with PEOPLE in 2014 by saying,

"I'm very excited to begin this next chapter of my life with the woman who stole my heart."

After their fairytale engagement, Sasha and her fiance waited for nearly two years to tie the matrimonial knot, which was no less than a dream wedding.

Wait Is Over For A Fairytale Wedding!

Corbin Bleu and his fiancé Sasha Clements at Kleinfeld to pick out a dress for her wedding.

Corbin had already seen his love donning the possible bridal dress for their wedding in the trailer for Say Yes To The Dress. The wedding was planned for 23 July 2016 and the couple even a made a beautiful wedding invitation for their prospective guests which included family and friends. Sasha and her fiance finally got married on the scheduled date in a grand ceremony at Hummingbird Nest in Santa Susana, California. The wedding was attended by 160 guests including close friends and family.

For the event, Sasha looked flawless in a custom-made Pnina Tornai gown while her husband Corbin and the groomsmen were dressed gray Portofino tuxedos designed by Tony Bowls. 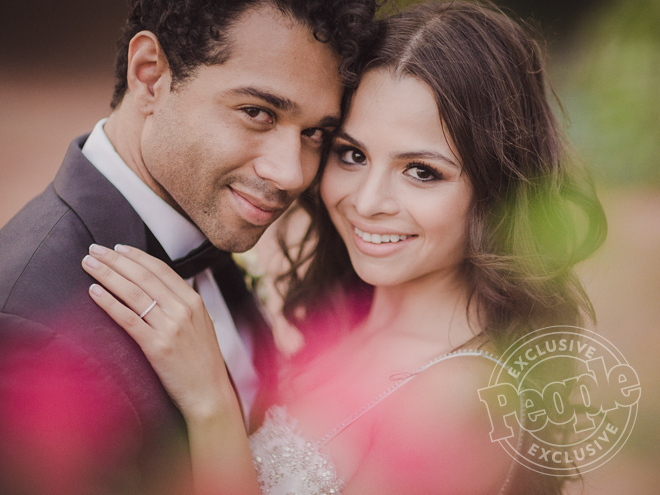 Corbin described his wedding to Sasha as the best day of his life. Talking to the People, Corbin said,

“Getting married to Sasha was the best moment of my life. I have to say my favorite part was the feeling that started in my toes and went all the way to the top of my head when Sasha came through the gate to the entrance of our venue and walked down the aisle."

Just like the couple waited for two years to get married, their honeymoon also didn't follow immediately. Sasha and her husband took thirteen months to embark on a honeymoon.

Finally, in August 2017, the partners set off for their honeymoon to Montego Bay, Jamaica where they enjoyed some romantic times at a private bungalow located at the Sandals Resorts Royal Caribbean Resort and Private Island.

More From LiveRamp Up:- Make Your Anniversary Special: Top Ten Ideas for Celebrating Your Wedding Anniversary: Make Your Life’s Every Single Moment Memorable Sasha and Corbin are currently leading a successful married life. The couple has not yet made plans to start a family but fans may not have a long time to see their favorite pair become parents.

Sasha Clements was born on March 14, 1990. She is a Canadian actress who is popular for portraying the role of Kiki Kincaid in Majority Rules!. She has also appeared in Disney Channel movie How to Build a Better Boy in 2014 where she portrayed the character of Marnie. Her recent film credit includes Open Heart, and Degrassi Don't Look Back.