By LRU Writer | On: June 05, 2018
Savannah Brinson is recognized as the wife of the famous NBA player, LeBron James. Before Savannah could be LeBron's loyal and committed partner to her multi-millionaire husband, she has a long and romantic history with him. Started dating at an early age, the couple has gone a long way from college pregnancy to star-studded wedding ceremony. 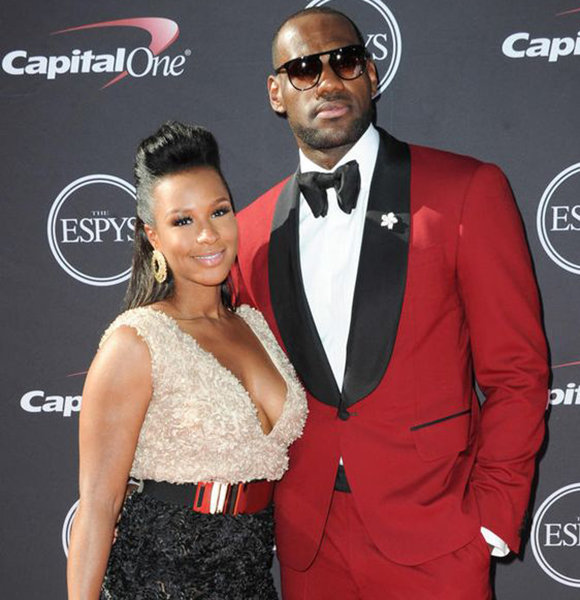 Savannah Brinson is recognized as the wife of the famous NBA player, LeBron James.

Before Savannah could be LeBron's loyal and committed partner to her multi-millionaire husband, she has a long and romantic history with him. Started dating at an early age, the couple has gone a long way from college pregnancy to star-studded wedding ceremony.

Let's take a short tour around the romantic life of Savannah along with her wiki-like-details!

High School Sweethearts, Stronger Than Ever

Savannah and LeBron first met at a football game. Later, he invited her to a basketball game; however, she revealed that she had no idea LeBron was a player.

The couple commenced their dating life when she was 16 and attending St. Vincent-St. Mary High School in Akron, Ohio. For the first date, the couple went for a meal at Outback Steakhouse. The 31-year-old forgot her leftovers in LeBron's car, which he later returned to her. Remembering the incident, Savannah told Harper's Bazaar,

Savannah became pregnant during her high school senior year, but LeBron comforted her by saying the arrival of a new member would not jeopardize their relationship and career.

Later, LeBron proposed to Savannah on New Year's eve of 2011 at the Shelborne South Beach Hotel in Miami with a $300,000 ring. Savannah immediately accepted the proposal.

The Ohio native and her longtime boyfriend got married at a grand wedding on 14 September 2013 at the Grand Del Mar Hotel in San Diego. Famous artists like Jay-Z and Beyonce performed at Savannah's wedding event, which lasted for three days and entertained around 200 guests. Savannah and husband on their honeymoon in 2013 (Photo: LeBron James' Instagram)

A year after marriage, Savannah gave birth to her third child, a daughter named Zhuri Nova James on 22 October 2014.

As of 2018, the couple is living happily, and LeBron likes to identify as the household in charge. The pair resides in Los Angeles with their three children and shifts back and forth from their $21 million house to $23 million mansion in Westside community.

The married partners are also going strong financially as LeBron alone brings the net worth of $400 million home. Further, the couple also performs charity works and have donated about $41 million worth of scholarship money to underprivileged students of the University of Akron through their foundation.

Born as the youngest daughter of father, J.K. Brinson, and mother, Jennifer; Savannah grew up with four of her siblings. The entrepreneur of height 1.70m is close to her family, especially her mothers; biological and in-law.

On 12 May 2013, Savannah posted a picture with her mom and LeBron's mother, Gloria Marie James, wished them on the occasion of Mother's Day. Savannah with mom and mother-in-law in 2013 (Photo: Savannah Brinson's Instagram)

Savannah, a businesswoman, launched a furniture line named "Home Court" in 2010. Further, she also works as an interior design and currently performs the job of Vice President in her family's charity foundation based in Akron, Ohio, named LeBron James Family Foundation.