By LRU Writer | On: May 14, 2019
Solenn at the age 16 was on a commercial for Pop Cola...rose to fame with Survivor Philippines: Celebrity Showdown in 2010...her father is a French marine while mom is a Filipina...She is married to longtime boyfriend Nico Bolzano...Planning to have a child in mid-2020... 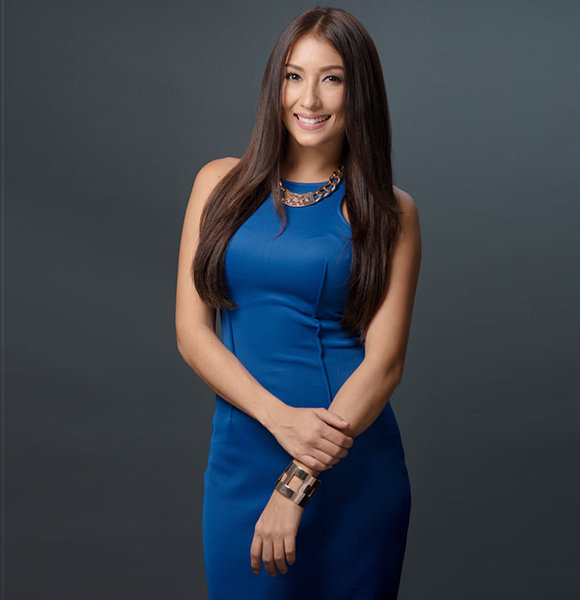 Even before her fame skyrocketed with Television series Survivors, Solenn Heussaff was already on the hustle. She stepped in the entertainment industry at the age of 16 via a commercial for Pop Cola.

She has not stopped since and has been making rounds wherever she can.

She was born to Cynthia Adea and Louis Paul Heussaff on 20 July 1985. Solenn is of mixed ethnicity, her father is French, and her mother is Filipina. For siblings, she has a bother, Erwan and a sister named Vaness.

Her birthplace being Makati, Philippines makes her nationality Filipina.

You May Also Like:- Eliza Dushku Is Pregnant; Expecting First Baby With Peter

As for her measurement, the gorgeous actress has a height of 5 feet 6 inch (1.68m) and a slim fit body with an average weight. Solenn left the Philippines and moved to Paris to study fashion design.

Are some people just good at keeping relationships or are they just lucky in the game of love?

Whatever the case is, Solomon is a lucky woman. She is married to her longtime boyfriend, Nico Bolzano. The pair started dating back in 2012 and got engaged in December of 2014. Later, officiating their union on 21 May 2016, they exchanged their wedding vows. Solenn has been with her husband for almost eight years now, and they still don't have a young one they can call their own. Makes sense as the pair both have their careers ahead of them.

However, Solenn won't keep her fans waiting any longer.

She is ready to turn her house into a home by adding a bundle of joy to the roster. On a press meet for her movie My 2 Mommies, she revealed that the pair would start trying for a family sometime around mid-2019.

Solenn rose to fame by ranking in the top three of the Survivor Philippines: Celebrity Showdown in 2010. The show put Solenn on many people’s radar, and lots of opportunities opened up to her. Interestingly, she pursued all that she could.

She released her music album titled Party Pilipinas on 17 July 2011. Following the success, she released two more albums, SOS (2013) and Solenn (2016) under her belt.

Leaving no stone unturned, Solenn also dabbled on the screens. As an actress, her most public projects are, Temptation Island (2011), Yesterday Today Tomorrow (2011) and Encantadia (2016).

If that was not enough, She has her own YouTube channel with over 350K subscribers. All of her ventures help the beautiful maintain her lavish lifestyle. Just from her Youtube and revenue alone, she earns an estimated $30K.

On top of that, she is currently endorsing Asian Secrets, Vitress Hair Solutions, Argentina, Century Tuna, and Greenwich Pasta.