By LRU Writer | On: March 19, 2018
Steve Jacobs Splits With Wife! Seven Years Of Married Life Ends In today's time, relationships have become more fragile and vulnerable to break up. One of the married life going through such fragility is that of Australian television presenter and actor Steve Jacobs. But what went wrong between the initially loved-up couple? 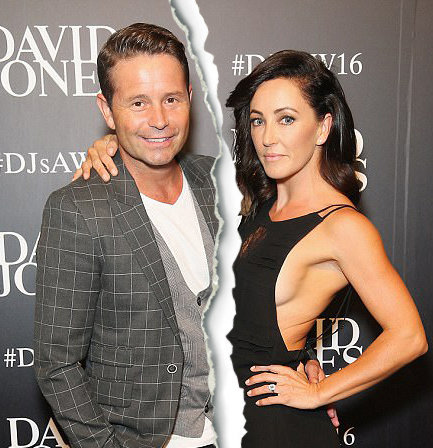 In today's time, relationships have become more fragile and vulnerable to break up. One of the married life going through such fragility is that of Australian television presenter and actor Steve Jacobs. But what went wrong between the initially loved-up couple?

Former weatherman Steve Jacobs has parted way with his longterm wife Rose Jacobs shortly after they moved to Vanuatu with their young daughters. Steve and his wife Rosie' separated after living a married life for seven years, and confidential paper even reveals that they parted ways last year.

The source close to the couple affirmed:

The couple was annoyed by the hectic schedules and the busy city life in 2017, which eventually led them to relocate to Vanuatu from Sydney. At that time, he had shared his reason for quitting as a weatherman in the Today show, stating:

'For the past 12 years, I haven't been able to wake up once with my wife, haven't been able to get the kids to daycare. After 12 years I've decided to hang up my boots from Monday to Friday, but the good news is... Mark Calvert (Today executive producer) has come up with a great program to make my work more flexible so I can stay with you guys.'

But their shifting to Vanuatu didn't turn well, as they could not work out their marriage. The pair hasn't revealed the cause of their separation, and further, Rosie' declined to comment on her divorce in an interview with Daily Mail Australia. Steve Jacobs with his wife Rose Jacobs along with their daughters (Photo: dailymail.co.uk)

Even though Steve and Rosie have parted their ways, it is reportedly said that they are living together for the sake of their young daughters.

Steve met Rosie for the first time in 2007. Their romance started to blossom, and after staying in a dating relationship for three years, they eventually tied the knot in an intimate ceremony in Bali, in 2010.

Steve's split with his wife wasn't the first time. Previously, he parted his way with his first wife,  Alison Jacobs, his partner of more than 20 years. It was difficult for him to move on from the relationship with his childhood sweetheart, Alison, so he diverted his focus toward work.

TheToday weatherman has entangled himself with the Nine breakfast show for the past ten years. No doubt, he shows his enthusiasm and dedication for his profession.

Condesering that fact, he perhaps is satisfied with the financial aspect of his job. However, he hasn't made any official comment on his net worth to this date.

Stay with us for the emerging updates on the life of Steve Jacobs!