Suga Not Limited To Having Girlfriend! Has Different View On Dating

By LRU Writer | On: February 21, 2018
Suga Not Limited To Having Girlfriend! Has Different View On Dating. Min Yoongi aka Suga, a band member of the widely known Korean band named Bangtan Boys (BTS), with his exceptional looks and talent, is trending all over the world. And we have the proof right here as we are going to enlight his journey to stardom by covering his personal life in one scoop. 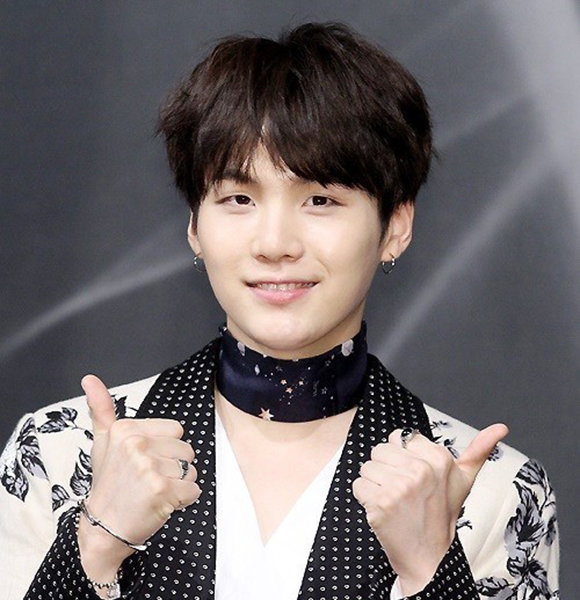 Min Yoongi aka Suga, a band member of the widely known Korean band named Bangtan Boys (BTS), with his exceptional looks and talent, is trending all over the world. And we have the proof right here as we are going to enlight his journey to stardom by covering his personal life in one scoop.

So, let's dig into the personal affairs of everyone's dear Suga!

Suga Have Girlfriend? His View On Dating:

Though a newbie in the entertainment industry, Suga's fans are already flooding the search engines seeking information about his girlfriend.

By dribbling many sources, what we have established that Suga does not have a girlfriend, as he has not been spotted with any girl so far. Besides, his tweets subtly hint his relationship status.

"So, are you dating?"
Me: LISTEN, HAVING A BOYFRIEND OR GIRLFRIEND IS NOT THE ONLY TYPE OF LOVE- pic.twitter.com/J891WIoaOo — Suga Updates! (@sugaupdates) November 16, 2017

Furthermore, in an interview with @star1, the BTS boy, Suga, said:

I don't feel the need to date. I like working for now. Honestly, there aren't even that many people I know in Seoul. I don't really like to meet people and there are still things that I want to achieve so until I've achieved them, I have no plans on getting into a relationship.

Despite his charm, he falls into the single zone. But to his fans' delight, Suga has a list of what makes someone ideal for him to date.

In the course of his love life, Suga wants someone that shares his love for hip-hop and has similar interests. He opined that for a relationship to be built, the couple must share something they both like.

Additionally, Suga revealed that should the match be right, he is not limited to dating girls: gender is not a factor for him.

In the process of disclosing his preference, Suga added that the best date for him would probably be something simple at home like listening to music, chatting over dinner, and lounging in pajamas all day.

Suga even stated that he likes women who wear Air Jordan 11 Retro Low “Bred” shoes. So, ladies, if you don't have a pair, it looks like a good time to grab one.

Though Suga has made up his mind about the kind of partner he wants, he is too busy to focus on a relationship, as his agents stated.

Raised in a low-income family with the real name Ming Yoon Gi, Suga was born in  Daegu-si, South Korea and celebrates his birthday on March 9 every year.

Aside from his contribution to K-Pop, the 23-year-old has other reasons that make him an exceptional artist. Suga also has some acting credits to his name which include a few K-Dramas.

The versatile artist is a singer, rapper, songwriter, and actor and has more than 2.6 million followers on Instagram. He often does vines and video compilations to interact with his fans.

Moreover, Suga's accent is just too cute to handle! Here's how:

At the young age of 23, Suga has already accumulated a fine net worth of $9 million, and he is only gaining more success.