By LRU Writer | On: February 25, 2018
Summer Mckeen Alluring Chemistry With Boyfriend – Dating at 18! Most of us dream of having a deep-rooted chemistry with the love of our life. While some of us are still hoping to have a fairy tale love relationship in our life, YouTube star Summer Mckeen is currently living one. 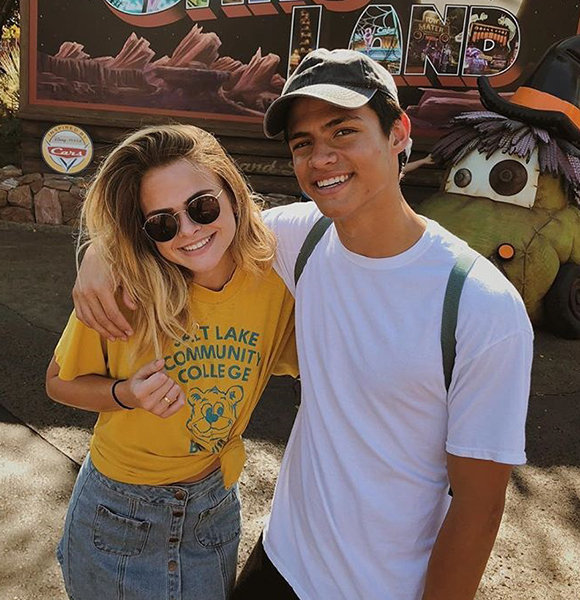 Most of us dream of having deep-rooted chemistry with the love of our life. While some of us are still hoping to have a fairy tale love relationship in our life, YouTube star Summer Mckeen is currently living one.

Well, curious to know how the love life of this star looks like? Keep reading to feed your curiosity!

A YouTuber and an actress, Summer Mckeen lives an intriguing love life. She is romantically involved with Dylan Jordan and the couple has been dating for a while now.

The couple met through their YouTube channel back in September of 2016. They both share the same manager who asked them to collaborate for a video to be uploaded on their channel. The pair got attracted instantaneously and started dating, and as of now, shares a beautiful bond with one another.

The couple even shared secrets of their relationship in an interview with CelebSecretsTV channel on YouTube back in March 2017. In the Interview, Summer was asked about the things she likes most about Dylan where she revealed that he is very positive about the situations and is fun to be around.

"He's very life loving and he's a lot of fun to be around and he's is very very positive."

When the same question was asked to Dylan, he replied,

"It would probably be her personality kind of mushy but she is the cutest little human."

Besides videos, this cute couple has been sharing a lot of moments together. They have posted the pictures of their shared moments on their respective Instagram accounts. They shared their first picture together in September, while they both filmed in a pool.

The duo even went to Disneyland back in August of 2017; they shared a picture of them together on a bridge sharing pink confetti.

The couple cherishes their long-distance relationship; they do not miss any chance to be together and strengthen the bond. Back in July, the couple shared a romantic moment by the lake as the sun sets on the horizon.

Furthermore, Summer learned to skate with her boyfriend Dylan; she shared a picture with him teaching her to skate on a skateboard. She captioned the picture as,

"wish I were a skater boi"

Similarly, the duo also attended prom together in April 2017, and a month before that, they celebrated their 6 months of meeting on 23 March 2017.

Even though the pair lives far from each other, Summer surely did not plan on missing her boyfriend's birthday. They celebrated his 18th birthday together, and Summer also shared a picture of them on Instagram where Dylan can be spotted sharing a loving kiss with his girl.

Born on 12 May 1999, Summer Mckeen is from Eugene, Oregon. She is the daughter of Dr. Dennis Dunne who is a Pediatric Dentist. Raised in a family of five, Summer has two sisters who go by name Madison and Brie, and believe us, both her sisters are just as beautiful as she is. At the age of 18, Summer is makeup and fashion enthusiast. She owns a YouTube channel that she started back on 4 July 2012 which as of now shines with 1.1 million subscribers and around 62,348,204 views.

In her YouTube videos, Summer discusses and shares about fashion and lifestyle tips with her viewers. She has even shared a video where she cuts her boyfriend's hair.

Moreover, she created her first YouTube video in April of 2010 which would become her secondary vlog channel. She partnered with Style Haul, a YouTube collaborative channel. She initially created her main channel under the name 'lookyheregirl,' named from a lyric from a Bruno Mars song.