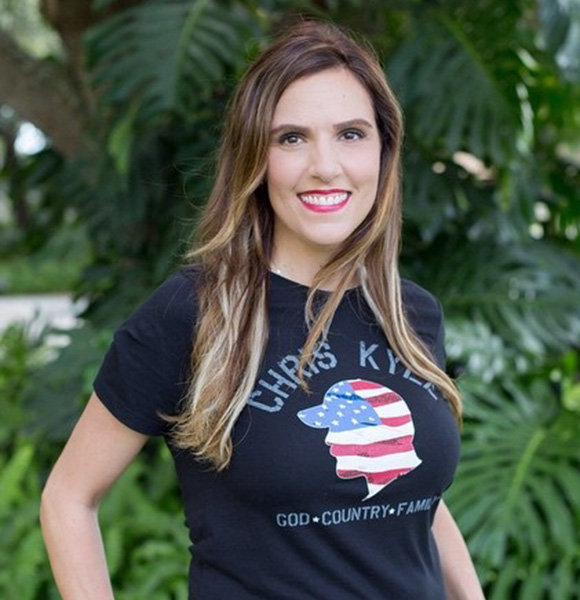 Chirs went on four tours to Iraq as a Navy SEAL while leaving his wife all by herself to raise their two children at home. Chirs later denied reenlisting for the sake of his wife Taya and their family but only to lose in the face of death.

The romance that Taya and Chris shared in the movie was what Taya had with Chris. They met at a bar, and back then, Taya had taken two scotch on the rocks. On their first meet, Taya was so drunk that she ended up getting sick. It turns out Chris held her hair back when she threw up.

See Also: Theresa Vail On Her Journey From Army Camp To Pageant Show But Still Hasn’t Considered Getting Married; Unveils Reason For Having Tattoos

Well, that is how their relationship got a jump start. The couple was going strong with connection, and not long after, Chris was about to be deployed and only had few days of leave from the military training.

The couple was so in love that they decided to exchange the wedding vows. Only a few days before they moved miles apart from each other, Taya and Kyle tied their wedding knot.

They held on to each other with their long-distance marital bond, and soon they got blessed with a family. Taya gave birth to their two children, one boy and one girl, over the course when Chris was on his tours. Soon their relationship started getting distant, and they almost reached the verge of divorce. However, Chris chose his family and returned home, denying to reenlist.

They were a happy family until Chris, and his friend Chad Littlefield were shot killed on a Texas gun range. The assailant was the former Marine Eddie Ray Routh, sentenced to life in prison for conviction of capital murder.

Taya lost the love of her life, but she would not give up, and she now raised her two kids all by herself. But did she ever considered dating someone else?

Taya, correspondent at FOX Channel, who is also the proud wife of the late Chris Kyle, would not consider having another man in her life. According to her, her heart would not just dive into falling in love with someone else.

Back in May 2015, she opened up with PEOPLE revealing her fears about starting a new romance. She divulged that he felt like a betrayal with her late husband, and she wouldn't give a relationship another chance. She said,

“My heart just wasn’t ready. I felt like it would be a betrayal. I was stubborn and hard-headed about it. I thought, ‘No. It’s Chris and me for the long haul. I don’t care. This is what I’m doing.’ ”

Adding to it, she also talked about how Chris's friend encouraged her to love again, saying,

“That he’ll die and his wife will never let herself be loved again.”

Even though Chris had previously mentioned her moving on with another man but for Taya, the thought of it would break her heart. She still loves and still feels married to him. She insisted on saying,

“Still, the idea of ‘moving on’ breaks my heart. I still love him. I still feel married to him.”

It seems that she would not remarry and is focusing on raising her two children and working. However, she is still open to what the future would hold for her.