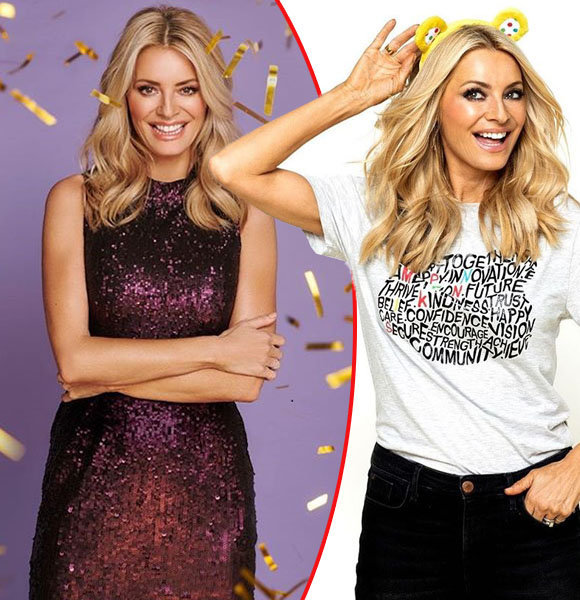 TV host Tess Daly is best known as the longtime presenter of BBC One’s reality show Strictly Come Dancing (2004). She started hosting the show when it first aired on television in 2004.

Tess is married to actor Vernon Kay. The two began dating in 2001 after meeting on the show, T4 (1998), where Vernon worked as a presenter.

More On Tess Daly's Husband:- Vernon Kay Managed Somehow To Save Relationship With Wife! Stood Past The Affair And Are Happy Now

Reminiscing on their first meet, the host shared to Digital Spy:

It was all quite immediate, really, because we instantly had such a blast together. I couldn't imagine having more fun with anyone else. It was pretty explosive, I tell you.

Moreover, after dating for a few years, Tess stepped towards married life.

Finally, on 12th September 2003, Tess tied the knot to Vernon by exchanging their wedding vows at St Mary’s Church in Horwich. Tess Daly and husband Vernon Kay as pictured during their wedding on 12th September 2003 (Photo: hellomagazine.com)

Following the wedding, Tess and her husband became parents with the birth of their daughter, Phoebe Elizabeth, on 17th October 2004. She weighed 7 pounds & 13oz at the time of her birth at London hospital.

Likewise, their youngest daughter, Amber Kay, was born 30th May 2009.

In 2010, Tess released her book titled The Baby Diaries: Memories, Milestones, and Misadventures, where she also recalled her experience with giving birth to her two daughters. As per her, Phoebe was birthed through a caesarean delivery due to having abnormal cells on her cervix.

Coach Buddy Stephens Bio:- From Net Worth To Family Life With Daughters

Although she wanted to give birth through labor, naturally, her doctor had advised against it due to her condition that was treated later on.

However, the presenter was able to give birth to her youngest daughter Amber Kay naturally through labor.