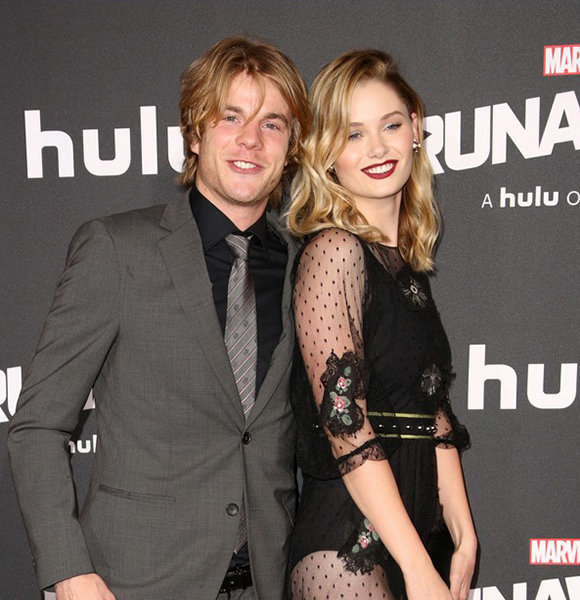 Virginia Gardner, an actress, famed for portraying Marvel's first gay superhero character in the 'Runaways,' is a familiar name and a face. At the age of just 22, she has been able to build a strong fan base, who thrives on knowing every little detail of her professional as well as personal life.

And, since her dating relationship with an actor, Graham Patrick Martin used to be talked about publically back in time; people are curious to know if he is still Virginia's boyfriend. Moreover, the primary concern here is Virginia's relationship status.

So, stay until the end to find out if she is still dating Martin or has a new lover in her life.

Who is Virginia Gardner Dating as of Now?

Many of us are all aware of the fact that Virginia dated actor Graham Patrick Martin back in time. They two made a cute couple together!

They even supported one another professionally by promoting each other's work amidst their respective followers.

Back in 2013, Virginia tweeted promoting Martin's work; she requested her followers to check out Martin's new movie's trailer.

Also, Graham tweeted back in January 2015 and shared an image of Virginia attending the premiere of her movie,

However, by the looks of it, Virginia is over Graham Patrick Martin now, as she reportedly is dating Graham Rogers. Neither Martin nor Virginia talked about them parting ways, but reports have it that Virginia has found love with a new boyfriend.

Also, it isn't just the reports making their union evident, as Rogers' Instagram post since August 2017 is filled with pictures of him with Virginia.

The two seemingly are spending most of their time with one another.

Moreover, Virginia too shared the picture of them standing in front of a beautiful backdrop back in November 2017,

However, the official confirmation of them dating is yet to come forth from the concerned parties.

Virginia, an American actress who belongs to the white ethnicity, was born to her parents on April 18, 1995, in California as Virginia Elizabeth Gardner. Virginia often provides a glimpse of her parents via Instagram and the smile that her family wears in those pictures is adorable.

Moreover, by the looks of it, she as well loves spending quality time with her parents.

Virginia isn't the only child of her parents as she has an elder brother too.