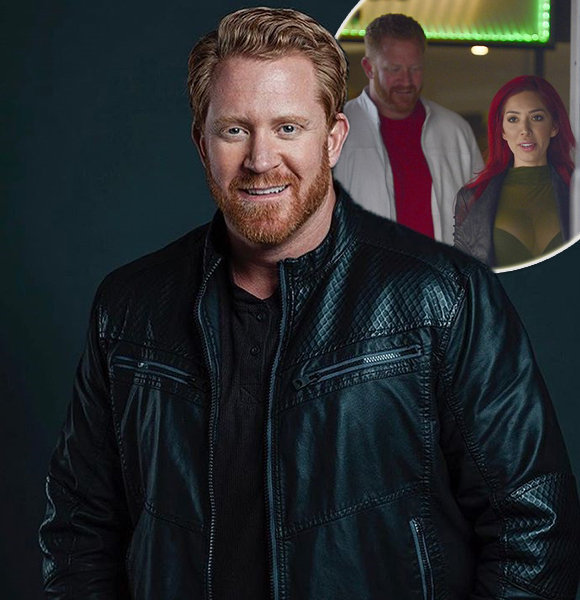 A day before confirming the romance, Aden, age 40, was spotted with his girlfriend crossing the street in Los Angeles. The duo had all smiles while they shared a romantic lunch on February 28. Aden Stay with Farrah Abraham on the streets of Los Angeles (Photo: dailymail.co.uk)

However, the news of their dating was confirmed with UsWeekly by his girlfriend, Farrah. While shedding lights on their relationship, Farrah stated,

“Aden is amazing. I’m a lucky woman and feel blessed. We have just started our relationship and I feel like I met someone who is amazing.”

The reality TV star also revealed how lucky she feels having Aden in her life. Lucky in love Farrah, who couldn't stop gushing about her man, added,

“I love that he’s Hawaiian, an amazing father, business entrepreneur and we have many similarities. I can’t say enough great things about him. I’m a lucky woman.” Moreover, with no intentions of hiding their relationship, Farrah shared with E! News that she fell for Aden right after she laid her eyes on him. Adding how she has her spark of feeling as soon as she saw him, Farrah stated,

"Aden is smart, a great father, working in entertainment and films for over 15 years. We're a great team and power couple. I met him in Beverly Hills and literally had a feeling as soon as I saw him...this is my man!"

"I don't want to say too much but I know what love at first sight is and this is that. I can't believe I'm even saying this as I literally thought I'd never have that feeling about someone ever again after Sophia's father passed away."

Before Farrah, Aden was previously dating the Pitch Perfect star Rebel Wilson back in March of 2017, but their relationship did not last long.

Before being rumored to be in a relationship with Rebel, Aden was involved in a romantic relationship with a woman whose identity remains confined. But it has come to light that Aden shares two daughters Logan and Madison with her. As of now, both the daughters stay with their mom.

It is still unclear whether Aden was married to the mother of his children or not. Though nothing much about their relationship has surfaced the media, it has come to notice that the two shares a good relationship bonded by their daughters.

Similarly, Farrah was also in a relationship with Simon Saran, CEO of Global Wealth Enterprise. She even thought of getting engaged with Simon; people even though she would walk down the aisle to become his wife, but the pair, unfortunately, ended their relationship back in April of 2017.

Before Simon, Farrah's first serious relationship was with her high school boyfriend, Derek Underwood, who died in a car accident two months before their daughter Sophia was born in 2009.

However, while the relationship of Aden and Farrah is still in its early stages, Farrah's daughter Sophia has already met Aden who surprised her with roses and teddy bears, while Farrah is still looking forward to meeting Aden's daughters.

Born on 17 July 1977, Aden Stay is a stunt double and actor who worked on 'Pitch Perfect 3,' 'Jumanji: Welcome to the Jungle,' 'Guardians of the Galaxy Vol. 2,' 'Jurassic World: Fallen Kingdom' and 'A Bad Moms Christmas.'

Moreover, Aden did stunt work for TV shows such as 'Lost,' 'Sons of Anarchy,' 'Agents of S.H.I.E.L.D.,' 'Hawaii Five-0,' 'The Mentalist,' 'Workaholics,' and few more. Aden also appeared as Dooley on 'Game of Silence' starring David Lyons. In addition to it, he played Mr. Wilson on 'Tyler Perry's Boo 2! A Madea Halloween' in 2017.

Apart from Hollywood, Aden co-own two business in Hawaii, a Mexican restaurant called Lui Bueno's and a heavy equipment business, NSC Construction. He graduated from the University of Las Vegas, where he studied business.