By LRU Writer | On: March 11, 2018
Angelo Boffa, 41, And Sharon Stone, 60, Engaged Or Just Rumors? Flaunts Relationship The 41-year-old Italian real estate mogul, Angelo Boffa with his lady-love Sharon Stone, who ages 60 currently, has swirled the rumours of their engagement after Sharon was spotted with a dazzling trinket on her ring finger on Thursday, 8th March 2018. 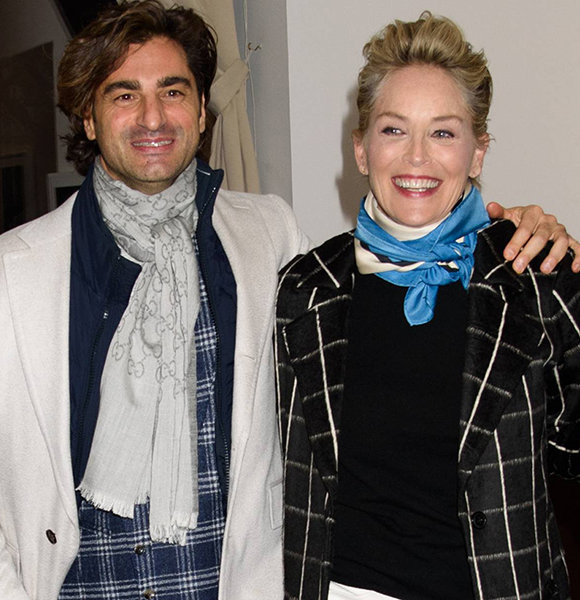 The 41-year-old Italian real estate mogul, Angelo Boffa has swirled the rumors of their engagement with his lady-love Sharon Stone, who currently ages 60. The rumors swirled after Sharon was spotted with a dazzling trinket on her ring finger on Thursday, 8th March 2018.

The lovebirds, who seem to have no problem with their age gap, were seen spending quality time at Miami beach while Sharon, the actress from Basic Instinct flaunted an emerald cut huge diamond ring along with her colorful bikini top and drawstring pants. Though the picture allegedly hints Angelo to have been engaged with Sharon, neither of the partners has commented on the rumor or have spoken out about it.

Moreover, the reps for Sharon has been silent on the queries as well, so it's unclear if Angelo indeed did his job by proposing his lady to get married.

Anyway, Angelo and Sharon were first noticed together when they both attended the Hollywood Reporter TV Talks at the 92nd Street Y in New York back in January 2018 and displayed their affection while walking arms in arms.

The event, where both lovers were all in smiles while gazing each other, was the supporting program for Sharon's HBO six-episode murder mystery Mosaic.

Well, if the engagement rumor is anywhere near true, then it will be the third time for Sharon to get married!

Previously in 1998's Valentine's Day, Sharon married Phil Bronstein, an executive editor at The San Francisco Chronicle. After five years of marriage, Sharon divorced Phil in 2003 due to their irreconcilable differences.

Before Phil, Sharon was in wedlock with the television producer Michael Greenburg from 1984 to 1990.

Besides marrying, Sharon had even got engaged with the American film and television producer William J. MacDonald in 1993 and with the director Bob Wagner in 1994.

As for now, Sharon has three sons; 17-years-old Roan Joseph with Phil Bronstein and 12-years-old Laird Vonne and 11-years-old Quinn Kelly Stone whom she later adopted.

Stay with us for the emerging update on the love life of Angelo Boffa and Sharon Stone!