By LRU Writer | On: July 15, 2018
Elvis Duran is engaged to his boyfriend, Alex Carr and the two are a perfect match. Elvis' fiance, Alex Carr was the one to propose Elvis for marriage on Friday, who got down on one knee to ask for his partner's permission. 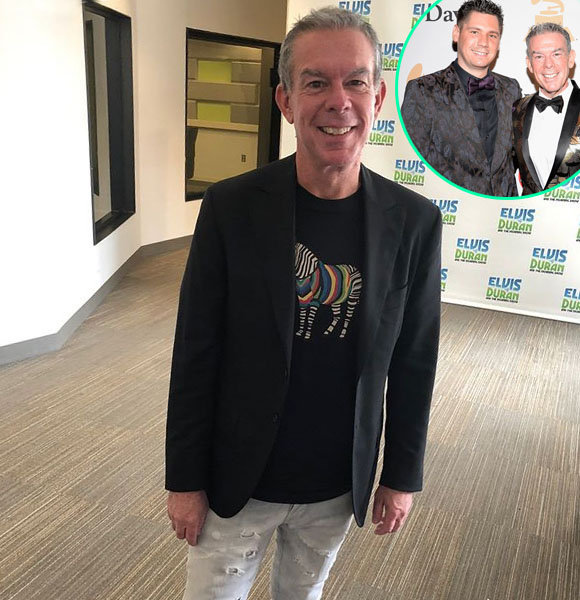 Elvis Duran is engaged to his boyfriend, Alex Carr and the two are a perfect match.

Elvis' fiance, Alex Carr was the one to propose Elvis for marriage on Friday, who got down on one knee to ask for his partner's permission. Alex popped up the question by showing a black umbrella to Elvis which had the words "Elvis Will You Marry Me" written in it. Elvis accepted the proposal immediately and thus their life as an engaged couple began. Alex also posted an Instagram video of him proposing the 53-year-old radio host, in which he expressed his feelings in front of a large audience who applauded Alex's romantic proposal. In the video, Elvis could be seen shedding tears of joy after his partner's sweet gesture. Further, Alex mentioned in the post that the 13th of a month was not unlucky as the pair got engaged on 13th of July and Alex was also born on the 13th of June.

"Yesterday was Friday the 13th. People believe that the day brings bad luck, but I totally disagree. I was born on Friday, June 13th. I’ve always considered myself to be lucky and blessed, as I was when Elvis came into my life almost 8 years ago...first as my boyfriend and now fiancé!!!! They say opening umbrellas in the house brings bad luck, but this time I don’t believe it. I love you Elvis Duran!"

The news of the engagement was later officially announced by Elvis' show network Z100 New York's Instagram page on 14 July 2018. The post which expressed congratulations to the couple also consisted of pictures of the happy lovers who could be seen petting their dog. The pair has not revealed any plans for a wedding yet, but are assumed to get married soon.

Elvis and his boyfriend-turned-fiance Alex, a zookeeper working at the Staten Island Zoo, were committed in a relationship for almost eight years before finally deciding to take their romance to the next level.

Elvis, who has conducted interviews with some high-profile celebrities like Justin Bieber, Lady Gaga, Katy Perry and Kanye West, first came out as openly gay in September 2010 while on-air. He is also a vocal supporter of the LGBT community and their struggle for equal rights.

The host of Elvis Duran and The Morning Show was also appointed as the grand marshal of the 2016 Miami Beach Gay Pride.