By LRU Writer | On: February 15, 2018
Hitched! Jessica Shears Married To Dom Lever, Wedding in their Bathers. 'Love Island' stars Jessica Shears and Dom Lever have been branded 'desperate' by viewers for getting married live on Good Morning Britain. The pair decided to take the next step in their eight-month relationship on 2018's Valentine's Day. 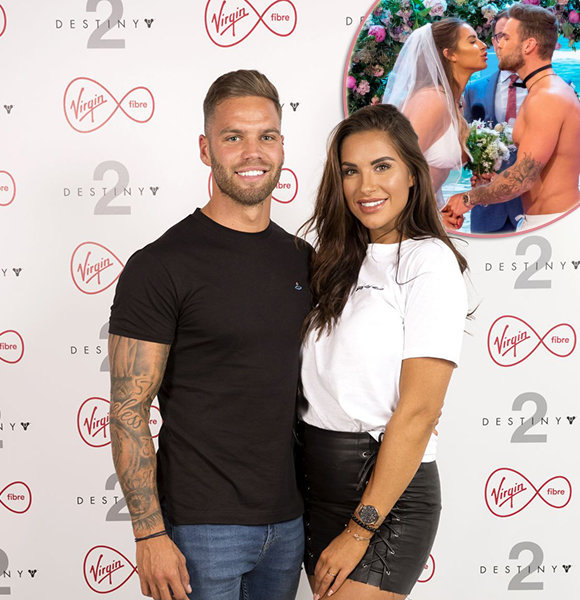 'Love Island' stars Jessica Shears and Dom Lever have been branded 'desperate' by viewers for getting married live on Good Morning Britain. The pair decided to take the next step in their eight-month relationship on 2018's Valentine's Day.

The couple stood in front of the show host, Richard Arnold, in nothing but swimwear, as they made vows poking fun at the reality dating show.

The stunning model Jess, who stands at the height of 5'9" (1.75m), stripped down to a white bridal bikini, while her fiance Dom wore a tiny pair of white swimming trunks. The couple walked down a pink aisle, and Richard Arnold officiated the marriage. Dom said,

I promise to share our life story on social media from this day forward because you’re my type on paper.

Speculators were shocked by the live TV ceremony, but it was not official. However, Jess has confirmed that the couple will tie the knot in Mykonos later this year.

Moreover, the viewers claimed they were ‘cringing’ and slammed the couple for tying the knot wearing just swimwear. Jess, through her Twitter, took a swipe at her critics, telling them to lighten up.

Jessica's response to the critics (metro.co.uk)

Likewise, Dom also took it to his Twitter where he added:

Dom talks about his marriage  (metro.co.uk)

Out of all of the cast of 'Love Island 2017,' Jess and Dom have been the targets of the most controversies due to their frequent #spon posts and the marriage that took place in a very short time of knowing each other.

Their 'Love Island' co-stars, Marcel Somerville and Gabby Allen, have admitted that they were blown away by the stunt. Allen told Metro at the NME Awards:

I was bloody blown away by it. [Jess] must have been freezing.

Another fellow islander, Olivia Buckland, appeared to take a thinly veiled swipe at the couple on her Twitter. Olivia liked a tweet which said:

Jess in a bikini & Dom topless getting married on GMB this morning has gotta be the most tragic thing of 2018. Imagine doing what's meant to be the most amazing day of our life dirty like that...

Perhaps the islander wasn't too happy about not being the first couple from the show to say 'I do.' Olivia and her boyfriend Alex Bowen got together on the second series of the ITV2's show in 2016 and called out engagement five months later. However, they are yet to be husband and wife.

Olivia wasn't the only former Islander to dig, as her best friend, Cara De La Hoyde also wrote a tweet which read, with laughing face emoji,

Surely this years lot are all just on a massive windup with us all.