By LRU Writer | On: September 02, 2018
Good Morning America host Lara Spencer just had the "biggest day" of her life! Lara Spencer and her tech entrepreneur-fiance Rick McVey exchanged the sacred wedding vows this Saturday i.e., on 8 August 2018 in an outdoor ceremony in Vail, Colorado in front of 135 friends and family members. 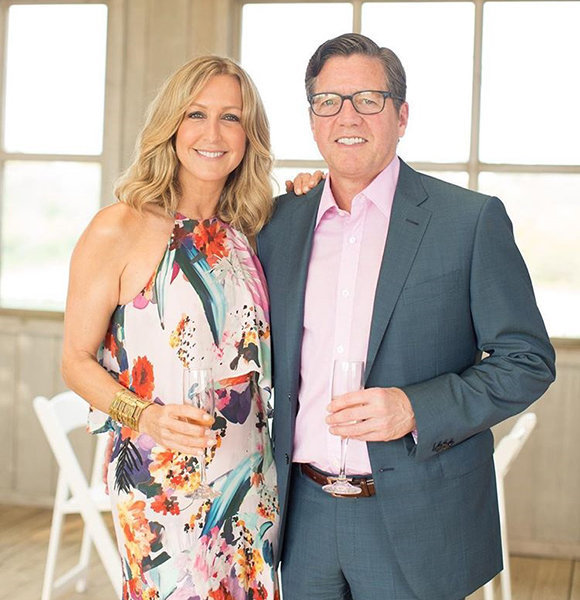 Lara Spencer and her tech entrepreneur-fiance Rick McVey exchanged the sacred wedding vows this Saturday i.e., on 8 August 2018 in an outdoor ceremony in Vail, Colorado in front of 135 friends and family members.

Lara, who walked down the aisle for the second time, wore an Adam Zohar's Bridal mermaid-designed gown, kept her hair up with loose pieces dangling in front with a long white veil flowing from the back. Her 16 aged son, Duff Haffenreffer accompanied down the aisle as Rick awaited to the end of the aisle.

The groom also stunned the ceremony with the cream blazer, black pants, and a matching bowtie. While she was walking the aisle with her son, Christina Perri's, A Thousand Years soothed the wedding's environment. Also, the attendee People's Editor-in-chief Jess Cagle shared a video of the TV host's special moment to his Instagram, where the blonde beauty was walking down the aisle with her son.

Before rushing to the altar, the newly married couple were friends for years. The couple first met each other on a blind date which was arranged by their mutual friend and was reportedly dating since earlier 2017.

She got engaged to her then-boyfriend Rick in January 2018 after he popped the question. This is the second marriage for both of the couple.

Lara was previously wed to the real estate broker and former reporter David Haffenreffer, with whom she shares two teenage children: daughter Katharine and son Duff. After 15 years of married relationship, Spencer announced in March 2015 that she and Haffenreffer were amicably divorcing.

The Chairman and Chief Executive Officer at MarketAxess, Rick is also divorced and fathered the three grown daughters. Lara shares the good bond with her husband's children and Rick too has an intimate bonding with Lara's kids.

On their happiest day, their five children; Rick's three and Lara's two children gave lovely readings at the ceremony.

Born on 2 July 1960 in the suburbs of Cleveland, Ohio, Rick is the son of the oil distributor father who invested in stocks as a hobby. Lara's second husband  Rick graduated in MBA from the Indiana University Bloomington in 1983 and began his career as a trader in Cleveland bank.

Then the tech entrepreneur moved to Chicago Mercantile Exchange before joining JP Morgan in New York. After visualizing the well-occupied market to use electronic trading to take market share from the top banks, he launched Market Axess in 2000 only with two employees.

He is the chairman, founder, and CEO of the publicly traded and successful financial technology company, MarketAxess. For his tremendous work, he was honored with the  "Ernst & Young National Entrepreneur of the Year" for financial services in 2012 for his work in Market Axess.

The newlywed Rick is the tech entrepreneur and summons the majority part of his net worth from his business. Along with his millions dollar figured net worth, his wife, Lara also accumulated the $6 million net worth as a television personality.