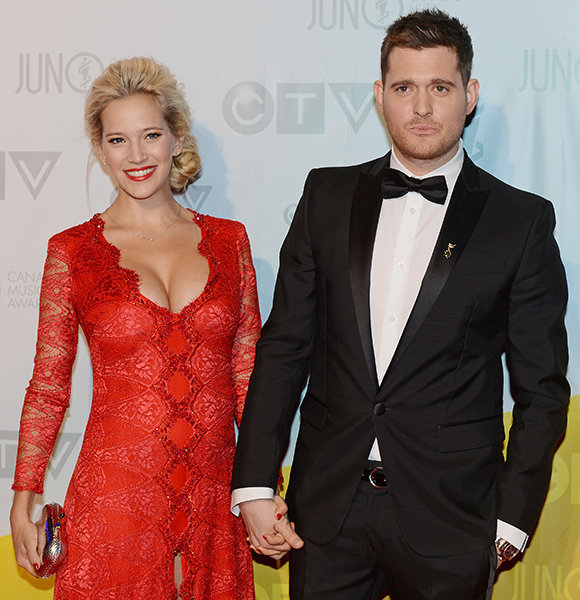 A new member on the way to the Bublé family!

Argentine actress/model, Luisana Lopilato and her husband and singer, Michael Bublé are expecting yet another child according to their representative, who confirmed the big news to E! News on February 3.

Luisana lately admitted that she would love to have another bundle of joy. As per Luisana,

Moreover, Laura Ufbal- an Argentinian journalist claimed that Luisana is around two and a half months pregnant with her third baby. Further, the couple is planning to announce the pregnancy at the end of March, when Luisana would be in Argentina for the promotion of her upcoming project.

Recently, Luisana, who enjoys a net worth of $7 million, left fans speculating if she was pregnant after she posted photos wearing loose tops on her Instagram. Many reports claimed that it was a "trick to hide her pregnancy."

Luisana is already a mother to two other children, sons, Noah (4) and Elias (2).

The happy news comes after a tough year with her eldest son, Noah struggling with his health issues. In November 2016, he was diagnosed with liver cancer.

Noah underwent chemotherapy and operation prior to the couple's statement on Facebook last February, which read,

“We are so grateful to report that our son Noah has been progressing well during his treatment and the doctors are very optimistic about the future for our little boy.”

Later on, Luisana's sister, Daniela revealed to sources in a text message, announcing that Noah has won the cancer battle. Around July of last year, Luisana opened up about Noah's cancer battle in a TV interview with Susana Gimenez.

The 30-year-old actress and model affirmed that things that happen in life make you realize that the most valuable things are not what we think they are and further, it is essential to have faith and be strong. She continued saying she prays to god every night when she goes to bed.

Well, for sure, her new baby will give her even more happiness and strength, don't you think so?