By LRU Writer | On: May 06, 2018
Marty Caffrey finally exchanged the marriage vows with his fiancée Danielle Staub, the Real Housewives of New Jersey star. The nuptial knot was tied in a wedding ceremony at Luna Beach Club, held on 5th May 2018. 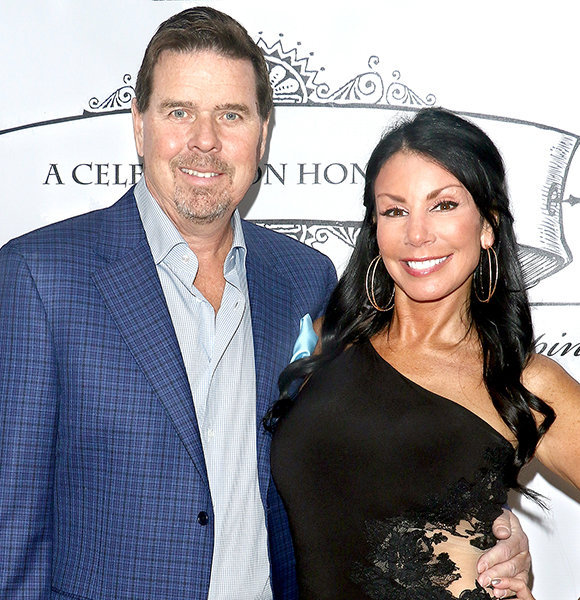 Finally, the "I Dos" were said!

Marty Caffrey finally exchanged the marriage vows with his fiancée Danielle Staub, the Real Housewives of New Jersey star. The nuptial knot was tied in a wedding ceremony at Luna Beach Club, held on 5th May 2018.

According to PEOPLE, Marty married Danielle in a sunset bohemian beach ceremony. The wedding ceremony was held on the Bahamas' North Bimini Island at the Luna Beach Club, where the bride wore the Pnina Tornai dress, from the Kleinfeld Bridal Party.

The wedding was attended by the RHONJ costars Teresa Giudice, who became the maid of honor, Melissa Gorga and Margaret Josephs, who were the bridesmaids for the ceremony along with Danielle's two daughters Christine, 24 and Jillian, 19. The bridesmaid also wore the pink dress from Kleinfeld Bridal Party.

However, as the wedding took place at a beach, all the designated guests there attended the ceremony barefoot.

Few hours before the nuptials the bride talked with US Magazine, where she admitted that she was a "little nervous" on the wedding as the guests came one by one to pay her visits. Danielle opened up with the magazine stating,

She also added she was “excited to be a wife” and talked about her stages of girlfriend to fiancee to finally being married. She stated,

"It's different when you're a girlfriend, and then it's different when you're a fiancée; the stages are all different. When it gets real, and we did our rehearsal last night, and we did our fake I do’s, it’s like, oh my God, we’re almost married. This is happening I felt like, when I saw his family last night for the first time after our rehearsal, on the beach, I felt them looking at me like I was a wife."

Moreover, Danielle expressed how the rehearsal dinner and the aftermath made her have the profound feelings. She stated,

"And I think it definitely made it super profound for me.”

Marty's wedding will be soon aired at the upcoming ninth season of the hit Bravo show, Real Housewives of New Jersey. Marty and Danielle have been dating since April 2016 and living together in her New Jersey home. The couple got engaged on May 2017 after a year of dating.

As for Danielle, it would be her third wedding ceremony. She was previously married to businessman Thomas N. Staub, with whom she shares two daughters Christine and Jillian. The pair split after 14 years of being together.

Before that, Danielle was first married to former FBI informant Kevin Maher.