Bollywood Loses a Gem! Veteran Actress Sridevi Kapoor Dies at the Age of 54

By LRU Writer | On: February 26, 2018
Bollywood Loses a Gem! Veteran Actress Sridevi Kapoor Dies at the Age of 54 The veteran actress Sridevi died at the age of 54, after a "cardiac arrest" on Saturday night in UAE. The first female superstar of Bollywood, Sridevi was with her husband Boney Kapoor and daughter Khushi at the time of death. The entire Kapoor family was in UAE to attend the wedding ceremony of Mohit Marwah. 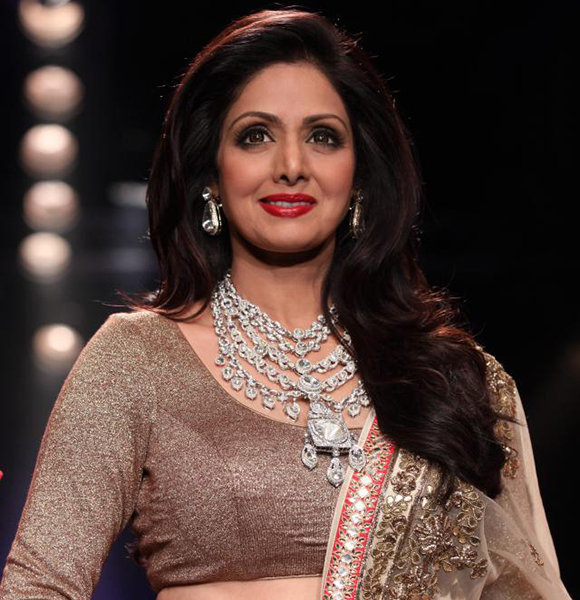 Bollywood has lost its Gem!

The veteran actress Sridevi died at the age of 54, after a "cardiac arrest" on Saturday night in UAE.

The first female superstar of Bollywood, Sridevi was with her husband Boney Kapoor and daughter Khushi at the time of death. The entire Kapoor family was in UAE to attend the wedding ceremony of Mohit Marwah. Sridevi's brother-in-law Sanjay Kapoor confirmed the news about her being dead to the Indian Express. The statement read:

“Yes, it is true that Sridevi passed away. I just landed here, I was in Dubai and now I am flying back to Dubai. It happened roughly around 11.00-11.30. I don’t know more details yet.”

Sridevi was also called as "Female Amitabh Bachchan," and coincidentally before the death of the veteran actress, megastar Amitabh Bachchan wrote on Twitter stating that he is feeling strange restlessness even though he doesn't know the reason behind.

Here, Big B's tweet is grabbing everybody's attention, and Twitterati claims that the actor had a premonition

The world woke up Sunday morning to the news of the untimely passing of Sridevi. Major celebrities, politicians, and other notable names took to the Twitter to express the heart-breaking griefs and tributes. The present Indian Prime Minister Narendra Modi also tweeted about the demise of Sridevi on Sunday. It indeed is a dark day for the Bollywood Industry. Sridevi's death impact was felt far beyond India, with the Mayor of London, Sadiq Khan, Pakistan's Mahira Khan and Senator Sherry Rehman, tweeting about her untimely demise.

Born as Shree Amma Yanger Ayyapan on August 13, 1963, Sridevi worked in Tamil, Telugu, Malayalam and Kannada films before entering into the Bollywood industry. Her acting career began at the young age of four, as a child artist, in the Tamil film, Thunaivan.

Though she started acting in the late 1960s, her performance in Malayalam film, Poombata (1971) won her the state award for best child artist. She made her Bollywood debut as a child artist in Julie (1975). Her first adult role was at the age of 13 in Tamil film Moondru Mudichu (1976).

She made her Bollywood debut in 1979 with the Hindi film, "Solva Sawan," and after four years, she became the most sought actress in the Bollywood with the film, Himmatwala.

After that, Sridevi took a break from her astonishingly rising career to raise two children with her husband, producer Boney Kapoor. As of now, her elder daughter Janhvi is set to make her Bollywood debut this year with Karan Johar's directorial Dhadak.

The late diva returned to the limelight with the 1997's box-office hit movies, Judaai, where she has portrayed the role of an ambitious housewife who got married to a man who can't afford her lavish wishes.

However, after working in Judaai, she took a 15-year break from movies and came back as one of the Bollywood's most treasured and enduring talents through Gauri Sinde's 2012 hit movie, English Vinglish. In the film, the actress portrayed the role of Shashi, who only speaks Hindi and found difficulty in the streets of Newyork while attending her niece's wedding. So, she enrolls in a four-week crash course to learn English.

Despite all the mega-hits, Sridevi's most memorable onscreen pairing was with her real-life brother-in-law Anil Kapoor, while her husband Boney Kapoor produced her most successful films.

The government of India even awarded her Padma Shri, the fourth highest civilian honor, back in 2013.

The late-talented actress had worked with almost all the top actors of Bollywood. She has been a blessing to the Bollywood, but sadly, now people will not see the Bollywood diva spelling magic on the silver screen.