By Asmita Neupane | On: October 04, 2021
Austin Riley swoon-worthy post of his wedding anniversary suggests how lucky he feels to have his wife by his side who is always there by his side. 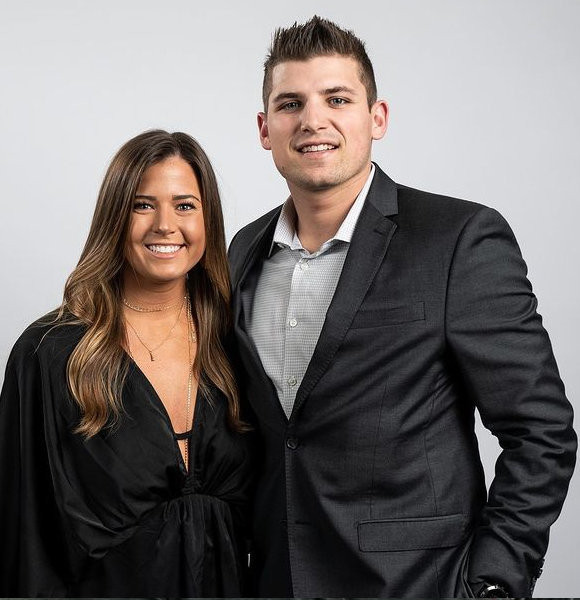 "Happy 2 year Anniversary to my favorite and forever dance partner! I love you Anna!"

The American baseball player Austin Riley expressed his love for his wife, Anna Riley, through an anniversary post on Instagram.

Austin Riley And His Wife

November 3, 2020, marks the two years milestone of the couple’s marriage, and the baseball player did not miss a chance to show his love for his wife.

Taking to his Instagram account, Austin uploaded a picture with his wife from his wedding day, and the post was flooded with several congratulatory messages from his followers. Austin’s picture with his wife from his wedding day (Source: Instagram)

The couple’s togetherness dates back to 2015 when the two began dating. As Austin posted on his social handle, reminiscing on the beginning of his relationship with his other half, he poured out his heart, praising his girlfriend-turned-wife for being beside him despite all the challenges they faced in their relationship.

His heartfelt caption dedicated for Anna read as,

From me being gone for 5 and 6 months at a time to not being able to sit still! You have managed to make me the happiest guy in the world!

Sticking by each other’s side, they strengthened their relationship with their wedding in November 2018. Austin Riley with his wife and his fur-baby, Luna (Source: Instagram)

The happy pair are very open about their love life and keep their followers updated with their timely posts on socials.

They are yet to add to their family of two, but for now, Austin and his wife are parents to their fur-baby, Luna, whom they adopted on October 3, 2019.

While Austin shows his admiration for Anna through his ‘gram posts, Anna, on the other hand, shows her support for her athlete husband with her presence in his games, cheering him from the sideline.

Indeed, the couple is a perfect match for each other, and their bond only seems to get stronger with each passing year.

Like his blessed married life, he shares a tight knitted bond with his family members. Born to mother Elisa Riley and father Mike Riley, Austin is the eldest of his siblings.

Having a father with a background in baseball, Austin followed his father’s footsteps dedicating himself to baseball from a young age.

He played baseball from his days at DeSoto Central High School and continued to play for the Mississippi State Bulldogs baseball team.

Later, grabbing attention for his abilities, he was drafted in 2019 by the Atlanta Braves, and ever since, his brilliance has led him to sign a contract worth a hefty sum.

After his Major League Baseball debut with the Atlanta Braves in 2019, he signed a 1-year contract deal with the team for 555 thousand dollars.

While his recent contract with the team amounts to 590,500 dollars of average annual salary as of 2021.

Despite making an entry in MLB fairly recently, the athlete is already making his way up with stunning gameplay and is set for a much more accomplished career in the future.