By Prakriti Dahal | On: December 03, 2021
Kevin Stefanski and his wife have been able to maintain a balanced and private relationship which has raised quite a curiosity about their family life. 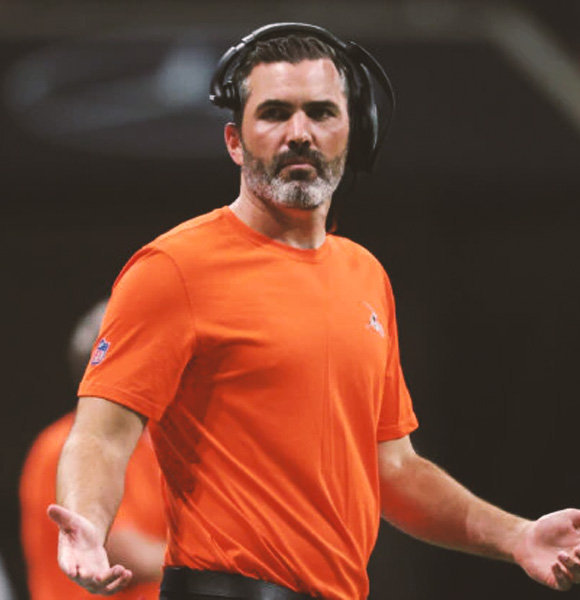 Kevin Stefanski's relationship with his wife is getting enormous appraisals because of his genuine bond and the privacy they have maintained with the media.

The couple is relishing their life alongside their three kids, and the family is rarely involved in the controversial headlines.

Being the well-known faces, Kevin Stefanski and his wife Michelle McCarthy always seems to be out of the spotlight. Neither of them is publicly active in social media, which has created quite a curiosity about their relationship among followers.

The couple tied the knot in July 2007, and since that day, both of them have been able to maintain the relationship without any hurdles.

Kevin and Michelle live their parental life with a daughter named Juliette and their sons, Will and Gabe, together, and their family pictures are nothing but adorable. Kevin Stefanski with his family at FirstEnergy Stadium (Source- Cleveland)

Like Philadelphia-born Michelle's present family life, her family life before her marriage is also quite secretive, but it is known that she was raised alongside her siblings, Kristin Friend and Kyle McCarthy.

Most interestingly, the balance has always been the 'word of the choice' for Kevin because he has made an excellent bank balance through his professional career as a head coach.

At the beginning of his career in 2006, Stefanski started as an assistant to the former head coach Brad Childress.

Later in 2017, after the termination of the Head coach Scott Turner, Kevin got promoted to Head coach of Vikings quarterbacks, and there he helped the team enlist their name into the NFL's 10th highest-scoring offense.

After his season on Vikings after 2017, New York Giants requested to hire Kevin as their new offensive coordinator, but Vikings did not want to lose Kevin as their head coach.

Later in 2020, January 13, Stefanski became the 18th head coach of the Cleveland Browns as he signed the five-year contract with them.

A year ago today we hired Kevin Stefanski as our head coach.

This Sunday we're playing in the Divisional Round of the #NFLPlayoffs. ðŸ‘ pic.twitter.com/owLWoFkwlF — Cleveland Browns (@Browns) January 12, 2021

The above Twitter post clearly expresses that the club is quite happy to have Kevin as their head coach.

Most of the income Kevin has accumulated is from his career at NFL, and his net worth is estimated to be $10 million as per the report of Sports Show.

Also, the same site had reported his base salary to be $6 million, excluding his deals with multiple brands. In 2020, Sportcasting reported the winners of Super Bowl LIV received a $124,000 bonus, and this shows that he gets paid more when his football team qualifies either for the playoffs or wins the Super Bowl.

Kevin Stefanski, an American football coach, has a remarkable professional career. Kevin being the son of an NBA executive and former basketball player has adapted the quality of the sport within himself from his father.

As a result, Kevin (born on May 8, 1982) has always been able to perform well and garner the attention of other sportspersons.

The Philadelphia-born Kevin graduated from  St. Joseph's Preparatory School in 2000 and the University of Pennsylvania in 2004. Stefanski played defensive back while at Pennsylvania and was named the Quaker's Freshman of the Year in 2000.

When he was at the University of Pennsylvania, Kevin used to be a fun-loving guy and spent his free time doing one of his favorite three things, namely: playing Madden, watching 'Band of Brothers' or watching '24'. Also, Stefanski often spent his time at his University with his senior-year roommate, Joe Philips.

Thus Kevin Stefanski, a famous face, is a balanced guy in his real life, which might be why his charms are still at the top-notch level.