'Forever and always baby' Mark Slaughter Writes To His Wife

By Asmita Neupane | On: November 09, 2021
Mark Slaughter who has garnered a hefty net worth from his dominating musical career continuously treats his followers with adorable posts of his beloved wife. 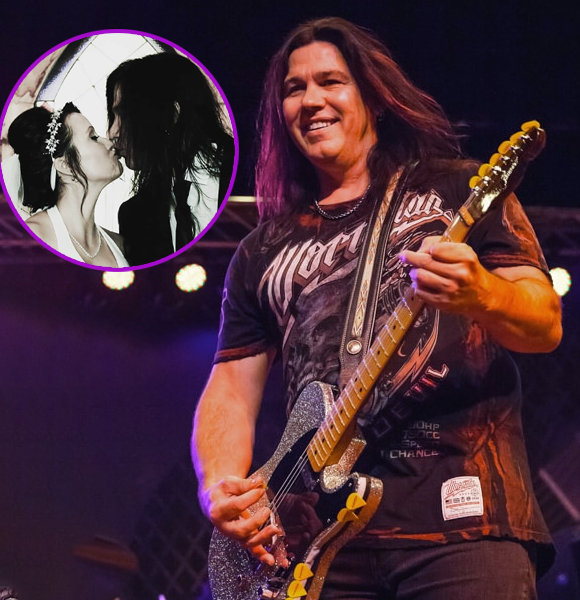 The Slaughter band vocalist Mark Slaughter’s sweetest anniversary post dedicated to his wife says it all about his happy married life.

“Happy 2nd Anniversary ! I love you... Forever and always baby."

On his 'gram post of April 25, 2020, the singer wrote wishing his beloved better half on their second wedding anniversary. Further, he paired the caption with a picture of his wedding day, where he shared an affectionate kiss with his wife. While 2021 marks their fourth year of marriage, their love for one another is only getting deeper with each passing year, and Mark's Instagram posts are quite evident to it.

Who Is Mark Slaughter Married To?

Sharing his fulfilling love life with his thousands of Instagram followers, the rock band singer does not miss a chance to express his affection to his wife, Leigh Ann.

Another one of his love-filled posts dedicated to Leigh is Valentine’s post of 2020, where he shared a collage of monochrome pictures displaying their happy moments together. Several of the couple's well-wishers took to the comment section to wish them a happy life together. One follower even wrote,

You both are an amazing couple, and I can clearly see how much love you have for each other. Many many more years of happiness to you both.

Indeed their undeniable chemistry clearly shows through Mark's social handles, which are flooded with his wife's posts.

From wishing her on her birthday to celebrating special occasions of their togetherness, the loving husband proudly flaunts his love for Leigh, which is enough to show how smoothly their boat of married life is sailing.

Although the singer is now blessed with a loving partner, he has had his share of heartbreak in the past.

Past Relationship And Children

Before his marriage with Laigh, the rocker was married to Rebecca Slaughter. Mark’s marriage with Rebecca lasted for ten years, coming to an end in 2010.

However, the two kept their love life extremely private and did not share any children. But, the singer is already a father to two sons Elijah Slaughter and Brandon Slaughter, from his relationship with his ex-girlfriend.

His son Brandon is at the age of twenty-six, and the proud father took to his ‘gram to congratulate him on his twenty-sixth birthday on March 10, sharing his pictures from childhood. The singer’s birthday wish to his son read as,

Happy birthday Son! So proud of you ! As Brandon’s social media bio describes, he is taking in his father's footsteps and is currently learning music production. Also, he is a photographer and gamer.

While Elijah, on the other hand, maintains a low-key life away from the limelight.

What Is Mark Slaughter's Net Worth?

Mark sure had a few ups and downs in relationships, but his flourishing career had always been on the rise from the get-go earning him a hefty sum.

The Las Vegas-born musician debuted in the music industry in 1988, after forming the band, Slaughter. Throughout his decades of musical journey, the artist has sold millions of records under the band Slaughter. In the 1990s alone, the album sales had reached over five million.

The rock band Slaughter also gave listeners several hits, with four of their songs peeking at the top 30 on Billboard Charts.

Summing up his success in music, Celebrity Net Worth reports Mark Slaughter’s net worth to be 5 million dollars as of 2021.

Currently, the Slaughter frontman resides in his Tenessee home, enjoying his married life with his wife, Leigh.