By Asmita Neupane | On: October 11, 2021
Oliver Hudson celebrates fifteen years of marriage with his wife whom he married at the age of 29 & their bond is only getting stronger with each passing year. 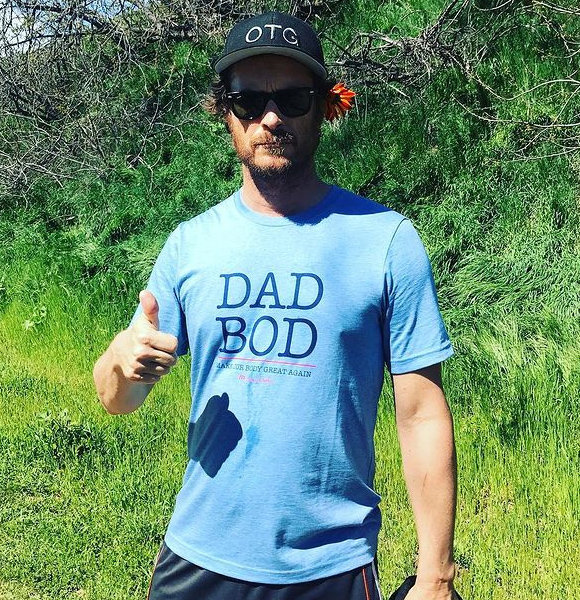 “15 years ago today I married one of the top LL BEAN models in the world and I still can’t believe it,” American actor Oliver Hudson wrote on his Instagram post of June 10, wishing a happy marriage anniversary to his beloved wife, whom he married at the age of twenty-nine.

Posting a slide of pictures of his wife, the Rules of Engagement actor wished her their happy fifteenth in an adorable fashion further writing,

The post lined up instantly with several congratulatory comments from his well-wishers.

Who Is Oliver Hudson Married To?

The actor tied the knot with the actress Erinn Bartlett on June 9, 2006, after he popped up the big question proposing her for marriage with a big fat 3-carat diamond ring.

As per People’s exclusive coverage of their wedding, the ceremony was held in Mexico. In the beachside wedding, the bride looked stunning in her white gown by Les Habitudes while the actor looked sharp in his Ralph Lauren suit.

The marriage, officiated by their Buddhist family friend, was held in a private setting with only ninety-four guests witnessing their holy union.

However, the celebration of their most awaited wedding had already begun a few weeks earlier when Oliver’s wife threw a lavish bachelorette party in Las Vegas, which included giving away goody bags filled with hundreds worth of Benefit cosmetics.

A year after sealing their relationship with marriage, the couple welcomed their firstborn, Wilder Brooks, followed by two more kids, Bodhi Hawn and Rio Laura.

As the proud father Oliver is, he does not miss any opportunity to express his adoration for his kids through his social handles.

On that note, he once shared a cozy picture with his wife and kids where the Hudson family was seen enjoying a few weeks-long vacation across California and Oregon. Oliver Hudson enjoying his family trip with his wife and kids (Source: Instagram)

The picture perfectly captured their happiness from their adventurous van trip across the states, which he referred to as ‘one of the most memorable times of his life.’ His caption read,

Two weeks through Cali and Oregon. An OTG family that is more in love than ever. One of the most memorable times of my life other than Dawson’s Creek.

Witnessing his ‘gram posts with his family, it's no wonder life has been treating him well with a fulfilling marriage, but at the same time, his excelling career is icing on the cake.

Oliver’s dominance on the screens began in 2007 with his breakthrough role in Rules of Engagement, a CBS comedy series, where he portrayed Adam Rhodes.

Having been in the entertainment industry since 1999, Oliver made appearances in several films and television series, including his most notable works in Nashville, Scream Queens, Splitting Up Together, only to mention a few.

Given his well-established acting career, Celebrity Net Worth reported his net worth to be around 10 million dollars as of 2021.

With the pace he is moving forward in his field of work, the actor, who currently resides in his California home with his wife and kids, is set for bigger accomplishments as an actor.

Oliver, born on September 7, 1976, is a California native. Born to his celebrity parents Goldie Hawn and Bill Hudson, he grew up in the limelight.

As acting runs in his family, Oliver and his sister Kate Hudson took on their parents' footsteps with a shared passion for acting.

Later, his parents split, and Oliver was raised by his mother and her partner Kurt Russell, a renowned Hollywood actor.

Oliver, who inherits Italian, English, German and Hungarian-Jewish descent, also shared screens with his mother in The Out-of-Towers, The Smokers, and Going Geek.

As for his most recent works, he last appeared in the film Injustice and television series Splitting Up Together.