By Asmita Neupane | On: October 05, 2021
Patrick Wisdom & his wife's bond keeps getting stronger & alongside the two are relishing their life parenthood as parents of two beautiful daughters. 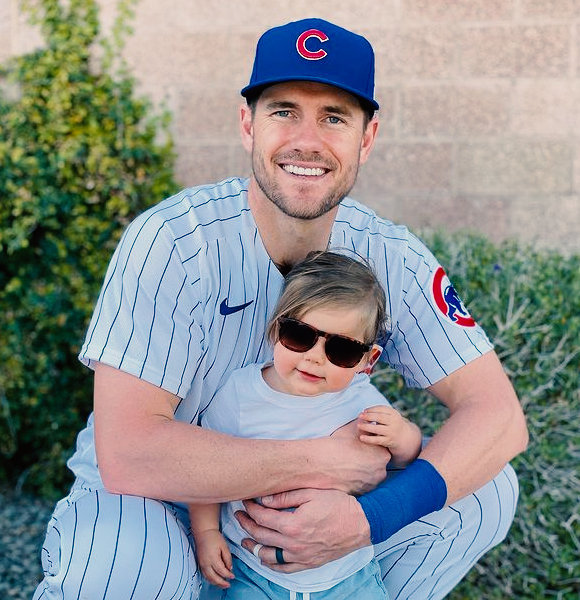 "Thankful and proud to have you by my side! Here's to forever," American baseball player Patrick Wisdom wrote to his wife, Caroline Wisdom, on his marriage anniversary post on Instagram.

The parents of two kids are running on their third year of marriage, and their mesmerizing bond keeps on getting stronger.

January 07, 2021, marks the third year of Patrick's marriage to his beloved wife. The professional baseball player shared about their big occasion with his Instagram followers by uploading a picture with his wife from their wedding day.

In the picture from their big day, Patrick and Caroline were under the spotlight, showcasing their bride-groom dance while the guests cheered them on. The couple's unwithering bond dates back to 2009, when they began dating. Patrick, sharing his first picture with his wife, took to his Instagram to show his gratitude to Carolina, saying,

Thank you for sticking by my side all these years... you're an amazing friend, a beautiful wife, and a fantastic mother! I love you.

Having dated for seven years, the couple got engaged in November 2009. As posted on his 'gram, the athlete asked his beau the big question in an adorable fashion, surprising her with an engagement ring on top of a hill, and Caroline's reaction to the surprise proposal was priceless.

From their decade of togetherness, the pair are parents to two adorable daughters, Molly, born in 2019, and Claire, born in 2021.

Patrick, being a proud dad, shares his father-daughter moments on his socials time and again. Wishing his firstborn on her second birthday, he shared a cute picture where his little one held his hand while walking on the street. While the Chicago Cubs baseman lives a happy family life with his family of four, he enjoys his professional success as a sought-after baseball player.

Making his Major League Baseball debut in 2012, Patrick was drafted by the St. Louis Cardinals. Later he signed a contract with Batavia Muckdogs the same year.

Proving his prominence in the baseball arena, he quickly became a sought-after player who played for Texas Rangers in 2018 and joined Seattle Marines in 2019.

And, since 2020, he has been playing as the third/first baseman for the Chicago Cubs.

According to Spotrac, the Chicago Cubs signed a one-year contract with Patrick for an annual salary of 570,500 dollars.

Born on August 27, 1991, the baseball player, passion for the game goes back to his childhood.

I think my parents say I just naturally grabbed a bat — you know — one of the little baby toys we had.

Patrick said while talking about how baseball caught his attention initially.

Caption- Patrick Talks About His Childhood

Growing up, Patrick and his brother played in the same team and were known as the powerhouse team.

Fortunate enough to have the support of his parents, Patrick continued to harness his baseball skills and made significant progress since high school.

Going into his college years, the Cubs baseman's impressive record with 303 hitters and 3rd all-time home runs led him to be drafted in 2012.