By LRU Writer | On: July 20, 2018
Meet Katie Goodland goes around social media under the name of Kate Gooders. You must be wondering what makes her wanted. Well, she is England and Tottenham Superstar (@HKane) Harry Kane's childhood pal turned girlfriend.The "beauty and brains" has got a degree in Sports Science. 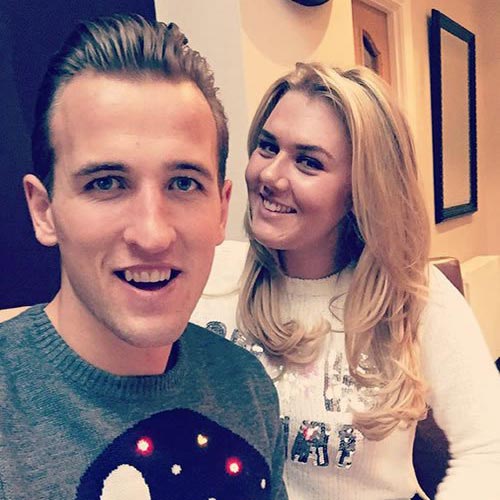 Meet Katie Goodland goes around social media under the name of Kate Gooders. You must be wondering what makes her wanted. Well, she is England and Tottenham Superstar (@HKane) Harry Kane's childhood pal turned girlfriend. The "beauty and brains" has got a degree in Sports Science.

Indeed, she is someone special. She has got a world-famous boyfriend who never fails to be by her side during ups and downs. Not only he says no to alcohol or nightclubs, but he is also a complete professional and a kind-hearted man. He has got lots of good habits like being fit, golfing and much more. They have been together for almost 5 years now. If you aren't aware, Kate and Harry grew up together and even went to the same school. It's your choice to call their love a  coincidence or a destiny.

"We went to school together, so she’s seen my whole career. Of course, she’s finding it a little crazy. I think she’s even been in the papers a couple of times taking the dogs out"

-Harry Kane in an interview with Esquire.co.uk in 2015

The 23-year-old socialite is very active in social media with 17.5 thousand Instagram followers (@kategoodersxx). She also has over 3800 twitter followers (@KateGoodlandx), but she uses this accounts to promote her man and support his football club, Tottenham Hotspurs. Their love can be seen in this tweet on valentines day February 2016.

One of the most famous British WAGs and their refurbished home:

Kate, one of the most famous British WAGs, resides in the newly refurbished house in Essex, London with her boyfriend Harry Kane. They share the house with two Labradors; one golden and one black. Harry and Kate got the dogs in October 2014 and named them Brady and Wilson. The dogs are an important part of their family.

Yes, they have known each other for a long time, and Harry makes sure that Kate still feels special. He has taken his childhood sweetheart on many vacations, including to this fabulous 'tree house getaway' in April.

Miss Goodland seems to be a lucky charm for the striker, and the couple is not uncomfortable with sharing their love online. Harry recently wished Kate Happy Birthday by tweeting "Happy birthday to my beautiful @KateGoodlandx Love you" and posting a beautiful picture of her.

Similarly, Kate also posted a picture of her and Harry Kane and wished him "happy birthday" by saying "Love you millions."

Harry Kane is happy to share his achievements with his better-half as reported by the sun.co.uk. While celebrating the 4-year anniversary of his first goal for his club Tottenham, Harry brought home some Pie and Mash (David Beckham's favorite) to share with Kate for the special occasion. Harry Kane posted this on their anniversary

A trip to the Bahamas with Katie

Harry and Katie Cycling together

Kate will be supporting Harry and Tottenham Hotspurs next season in the Premier League as well as the UEFA Champions League. We hope that the couple can maintain their lovely support for each other. We also wish that Harry gets the confidence, like when he is scoring goals, to ask Kate to marry him.

We know it's a stupid question, but do you think Kate is the right candidate to be Harry Kane's wife.

Similarly, do you think Harry is the best man for Kate? Please, do share your opinions. Meanwhile, Harry will be busy balancing his personal life and professional life.

The star Spurs and England striker, 22, has revealed that he is going to be a dad for the first time and was even retweeted by Katie. Harry Kane and Katie Goodland are expecting their first baby together in January of 2017.

He expressed his happiness on Twitter, posting: "So happy that @KateGoodlandx and I are expecting our first child! Exciting times ahead! Can't wait!" he 2015 PFA Young Player of the Year, Harry Kane, currently plays for English Premier League side Tottenham Hotspurs. Kane was born in London and made his professional debut for the club in August 2011.

He was a product of the Tottenham Youth Academy had been loaned out to many clubs before he made his breakthrough in the 2014-2015 season. He scored 31 goals in all competitions for Tottenham and became the first player to do so for Tottenham after Gary Lineker.

Harry Kane finished the 2015-2016 season as the highest goal scorer in the Premier League with 26 goals to his name. He also became Tottenham Hotspur's highest goalscorer in a single season, surpassing the likes of Teddy Sheringham, Jurgen Klinsmann, and Gareth Bale.