The Family is Everything for Jermaine Jones: Married to Former Miss Germany, 5 Children. Career history and Net Worth

By LRU Writer | On: June 28, 2016
The family is everything to professional soccer player Jermaine Jones, who currently plays for MLS side Colorado Rapids. Jermaine has expressed how lucky he is to have such a wonderful family and shares his belief about family and why he wants to be a good father to his children. 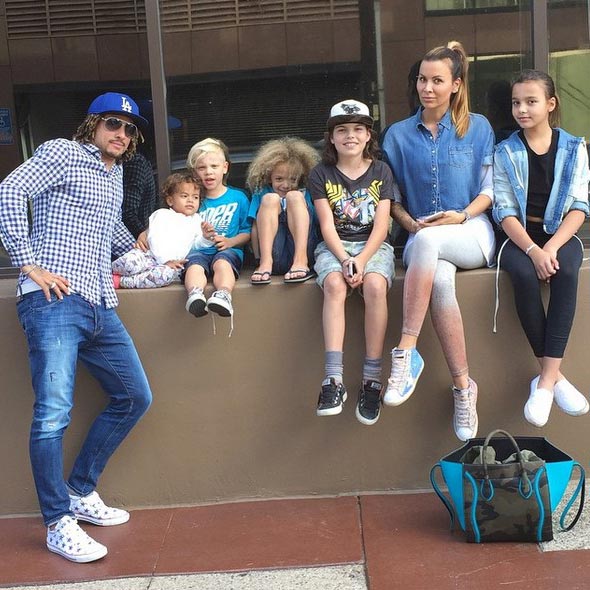 The family is everything to professional soccer player Jermaine Jones, who currently plays for MLS side Colorado Rapids. Jermaine has expressed how lucky he is to have such a wonderful family and shares his belief about family and why he wants to be a good father to his children.

Jermaine Jones' video in US Soccer:

Jermaine has had a history of rash decisions inside the pitch and has a reputation for being a hard man. However, Jermaine Jones outside the field is quite the opposite. He says that in the field 'you play to win', but outside the field he wants to be known as a good man who helps everybody. In an interview with US Soccer in February, he said, "It is very important to have family around me, especially my kids."

Jones, now 34-years-old, has settled in Los Angeles with wife, who was Miss Germany 2003, Sarah Gerthe. They got married in 2007 and had 5 children together, Keanu, Liya-Joelle, Kenyon, Junius, and Jadee-Mae. His oldest son, Keanu, is 14-years-old and his youngest daughter, Jadee-Mae, is 3-years-old.

In January, the US national soccer team held their training camp in Carson, California.The training center was close to his house in Los Angeles, and this allowed Jermaine more time with his family, and he further expressed his happiness in being able to spend more time with his children saying," I can give them the feeling that they have me here now."

In the ussoccer.com video series 'One Nation. One Team. 23 stories' Jermaine Jones talks about reconnecting with his father, who had left when he was just 6-years-old. He says that his wife helped his father reach him. He also shares his happiness on having him back and his children having a grandfather.

Jermaine Jones' Story on the 'One Nation. One Team.' video series:

On Father's Day, he showed his joy at having his children by sharing this picture on his Instagram account with the caption " I'm thankful every day that God gave me these 5 children ????????!! Happy Father's Day".

Jermaine has got dual nationality as he was born to an American Father and a German Mother. He spent his childhood in the various US cities but at the age of 13, Jermaine moved back to Frankfurt, Germany with his mother after his parents got divorced. He was a ball boy at the local soccer club, Eintracht Frankfurt before he got his first contract for the same club at age 18. He played for both Eintracht Frankfurt II (B-side) and Eintracht Frankfurt (A-side) from 1999 till 2004.

At the end of 2006 - 2007 season, Jermaine joined another Bundesliga side Schalke 04. He played 129 times for the Gelsenkirchen-based team. He stayed at Schalke for 7 years between 2007 and 2014 making about $ 5 million. He also played, briefly, for English side Blackburn Rovers when he was loaned there in 2011. In January 2014, Jermaine moved to Turkish side Besiktas, where he played for 6 months, before moving to Major League Soccer (MLS)in the US.

Fans Happy about Jermaine Jones coming to the MLS.

In August 2014, Jermaine agreed to a contract with MLS and became a player on a salary of $ 4.8 million for 18 months. Jermaine's right was received by Boston-based Franchise New England Revolution, in a blind draw. However, Jermaine did not extend his contract with the Revolutions due to a massive reduction in his salary. He even took to Twitter to show his disappointment.

In March 2016, Jermaine was traded from the New England Revolutions to the Colorado Rapids. He did take a huge cut in his salary. He is expected to make only $ 1 million, which is a lot less than the $ 4.8 million he made in Boston. But that will not make a huge difference to his net worth of $12 million.

Jermaine Jones is also a regular in the US national team. Having parents of both Amercian and German nationality, he played for the German U-21 side and only became a US National Soccer player on the senior level. He became a household name in the USA after scoring a fantastic goal against Portugal in World Cup 2014. Jermaine has made over 60 appearances for the national side scoring 4 goals.

Here is Jermaine's incredible goal against Portugal in the group match at the 2014 world cup in Brazil.

In the absence of Jermaine Jones (who got sent off in the Quater-Finals against Ecuador), the US Men's National Team has been eliminated in the Copa America at the semi-final stage by tournament favorites Argentina. They are awaiting to play Columbia in the Third-Place Playoff match to be held in Phoenix, Arizona.