Albie Manzo In Love With Girlfriend! Getting Engaged On The Bachelor’s Mind?

By LRU Writer | On: January 25, 2021
American entrepreneur Albie Manzo rose to fame after appearing in the television series, Real Housewives of New Jersey(RHONJ) with his family. He attended the show from 2009 to 2013 and garnered a lot of followers. Besides established business and good fame, Albie Manzo also has an ecstatic dating life with a beautiful girlfriend. The couple was first speculated to be dating.. 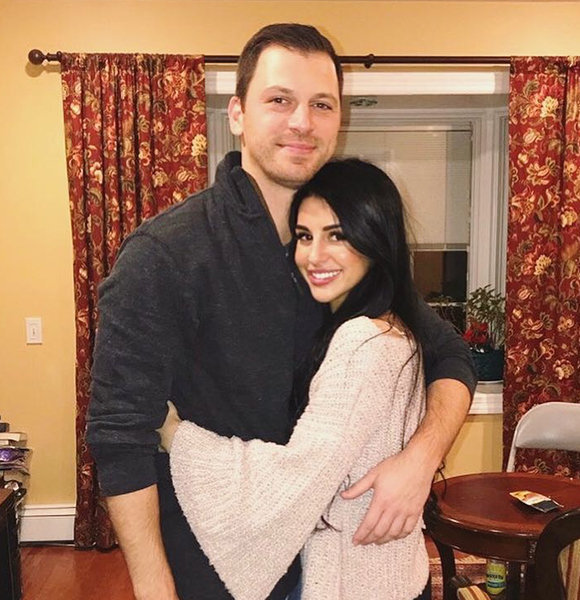 American entrepreneur Albie Manzo, who runs a beverage company BLK. Water, rose to fame after appearing in the television series, Real Housewives of New Jersey(RHONJ) with his family. He attended the show from 2009 to 2013 and garnered a lot of followers.

Besides established business and good fame, Albie Manzo also had an ecstatic dating life with his beautiful girlfriend. But their cuddly romance seems to have faded away as there is no sign of their romance on their social media.

Have they parted ways? Well, keep reading to know more!

Albie Manzo, the eldest son of the Manzo family cast on the BRAVO's TV series, RHONJ, changed his single status to taken after he publicized his relationship with girlfriend, Jamie Virginia Rose through social media.

The couple was first speculated to be dating after Albie Instagrammed a picture with Jamie along with a cryptic caption "you know when you know" on 29 September 2017. Flaming the speculation, Jamie also posted a picture with Albie, and captioned the picture, "I know" as a reply to her bae.

The speculations turned true after Albie shared a picture where she and Albie were spotted locking their lips passionately. The image was uploaded on 12 November 2017 in Jamie's account.

Since then, the couple unhesitantly uploaded cuddly pictures in their account quoting out their love for each other.

One of such instances is when Albie, co-owner of a New Jersey's restaurant Little Town Social, wished Jamie a Happy Birthday on 30 November 2017. He Instagrammed their picture and captioned it quoting that Jamie is the best thing that has ever happened to him. Albie further expressed his affection writing:

Moreover, the couple celebrated most of the festivities together, be it celebrating Christmas or New Year. The lovebirds even rejoiced the 2018's Valentines together and shared the mesmerizing moments with their followers.

Albie uploaded a snap of the couple wrapped around each other, simultaneously wishing his love on the valentines day in the caption. The relationship that the couple flaunted on their social media affirms that they were happy together. Moreover, their loving bond clarified that Albie got a partner just like he had described in an interview with PEOPLE in 2016.

Don't Miss: Wondering About Carla Hall? All You Need to Know About Her Parents, Husband and Net Worth

During the interview, Albie, a gay rights activist, discussed on a variety of topics that included his physical transformation and the qualities he wants in his girlfriend. Albie quoted that his physical fitness increased his confidence, and it has encouraged him to find somebody who makes him better and happy.

“I spent a lot of time in the gym, I spent a lot of time working on my career, and then getting myself happy, and now finally I’m at a place where I feel super confident with me, and I want to get out there and see if I could find somebody that’s going to make me super happy that I could spend the rest of my life with. Hundred percent. I’m all on in that. But like, as far as relationships go, I just think you’ve got to make each other better. That’s really what it comes down to for me. You’ve got to be on a team.” Back then, Albie appeared to have finally found his perfect match after enjoying singlehood for three years.

But now he seems to have parted ways from his girlfriend as the pictures that defined their relationship have now disappeared from the social media. Albie and Jamie both have deleted each other's pictures. All the romance that they had shared on Instagram are now nowhere to be found.

This raised speculation among the fans that they might have parted ways. Adding to it, Jamie recently posted a photo of her with a motivational caption hinting that she is moving on along with her life. She wrote,

"Life keeps going, so should you."

However, no any signs of break can be seen on Albie's Instagram. Well, the couple sure seems to have parted ways while breaking the hearts of their fans who were expecting them to get engaged.

Before Jamie, the business tycoon was involved romantically with part-time model and orthodontic technician Brittany Parks. The pair was together during the first season of the reality show, Manzo'd With Children. They dated for nearly a year before parting ways.

You May Also Like: Andy Cohen Along With Gay Activists Raising Voices: Dating With Journalist Partner

Moreover, Albie got romantically linked with American cheerleader, Lindsey Andrews before dating Brittany. However, the rumors faded away with the sway of time.

Keep Visiting as we keep you updated on the life of Albie Manzo!