By LRU Writer | On: July 31, 2019
Ali Krieger is the 2019 Women’s World Cup winner and a master with the ball in the...defensive midfielder joined the US national team in 2008 and helped her club FFC Frankfurt to a...The lesbian couple met each other for the first time playing for the U.S national team in...revealed their engagement rings and said they would get married in... 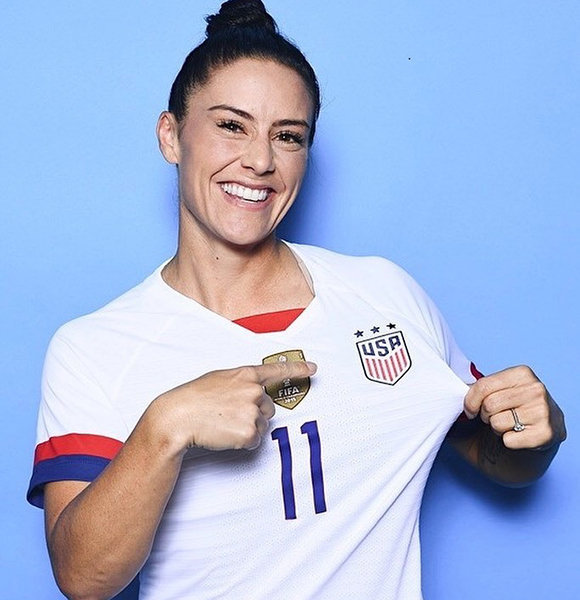 Ali Krieger is a member of the 2019 Women’s World Cup-winning team and a master with the ball in the soccer field. She is the ever-reliable defensive midfielder who can both pass the ball to her teammates and defend her post from opponents' attacks.

The American defensive midfielder joined the US national team in 2008 and helped her club FFC Frankfurt to a UEFA Women’s Champions League title, the same year. She also won the gold for her national team in 2015 World Cup. Ali was also instrumental in the US' 2019 triumph over Netherland in the Women’s World Cup in France.

Ali Krieger shares a decade long love bond with her football teammate and girlfriend, Ashlyn Harris. The lesbian couple met each other for the first time playing for the U.S national team in 2010. Since then, the duo has been openly flaunting their gay love in front of the world.

The couple sat next to each other on the bus & flight and even talked about their dreams in life. Following endless conversations, the two found love for each other and also credited their relationship as the pillar of their success. On 13 March 2019, the dynamic duo revealed their engagement rings and opened up on their plans on getting married. The couple got engaged way back in September 2018 but publicly disclosed the news only in 2019.

As of 2019, the couple are set to get married in Miami, Florida in December in a wedding that will see a total of 100 family and friends, and even their dogs getting dressed up.

Soccer players usually find themselves traveling around different places throughout their playing career. Surrounded by national team duties and club responsibilities, it is a challenge for the player to keep up the pace.

However, their efforts are handsomely paid off by their respective clubs or national teams with high pay scales and all the medical charges free of cost. Same was the case with Ali Krieger; the player performed her best wherever she went.

The former FFC Frankfurt star accumulated a considerable net worth serving the club for four years before moving to NWSL. In 2019, she lifted the prestigious World Cup for the US, which took her net worth to a total of $4 million.

American footballer Ali Krieger was born on 28 July 1984 in Alexandria to parents: Debbie Kreiger and Ken Kreiger. She was raised alongside a brother named Kyle Krieger - a popular YouTube vlogger - in a family of four.

Growing up, she attended Hylton High School in Dale City and played youth soccer for the Prince William Sparklers for 12 years. Her height of 5 feet 6 inches (1.75m) and weight of 60kgs helped her tremendously in adding a physical attribute to her game.

Then, the midfielder moved to the play for big clubs like FFC Frankfurt, NWSL and Utah Royals, making her the only U.S national team player to play for clubs abroad.

Now, the Virginia native plays for the Orlando Pride of the National Women’s Soccer League, which is the highest division of women’s soccer in the United States.