By LRU Writer | On: July 03, 2019
Alyssa Naeher's heroic penalty save in the semi-final matchup against England...boasts a reported net worth of..earns a salary of...began career in...hides info on husband/spouse... 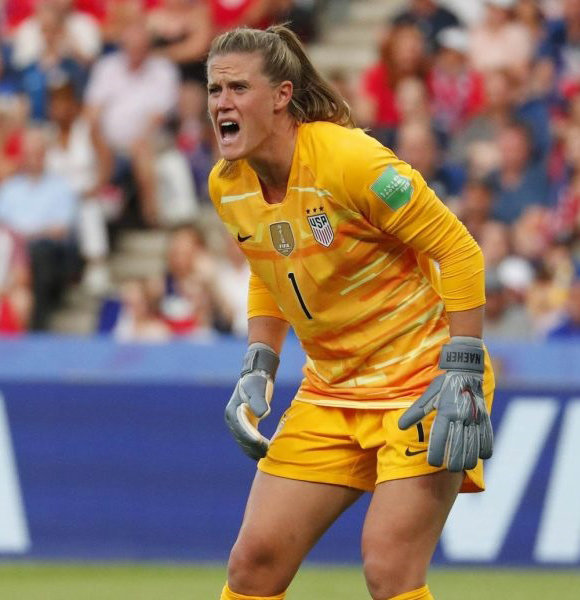 All thanks to Alyssa Naeher's heroic penalty save in the semi-final matchup against England at the 2019 Women's World Cup, the US booked a ticket to the tournament final. The reactions from the fans online said it all. She ended the night free of injury and with the stats of four shots face & three saves made.

When the US clinched the title as the world champion in 2015, her role as a backup to fellow goalie Hope Solo limited her contribution. After Hope retired in 2016, Alyssa took over the helm as the US' first choice goalkeeper.

Alyssa's international call up wasn't borne out of a thin year. As league's most prolific keeper with record 106 saves in 2014, she earned the crown as the NWSL Goalkeeper of the Year.

The following campaign, her career stats reached new heights as she registered a whopping 205 saves. She finished the 2015 season as the league's second best keeper.

Her US Teammate:- Carli Lloyd Husband, Net Worth, Family, Height

In 2010, Alyssa began her professional career with the NWSL side Boston Breakers. Impressed by her goalkeeping stats, rival Chicago Red Stars eventually signed her.

Alyssa, together with her US women's national team, is an advocate for equal pay.

Despite outperforming the US men's national team since 2016, the goalie and her teammates earn less. A USWNT member makes anywhere from $4.9k to $99k in salary/per World Cup game while their male counterpart takes home anywhere from $13k to $263k for the same.

At the club level, Alyssa earns a reported five-figure sum in salary annually. Add that to her endorsement deals, and her net worth should hover around a healthy six-figure mark.

For all her success as an internationally recognized soccer star, Alyssa has very little to boast about in terms of married life.

Opposite Of Alyssa:- Alex Morgan Husband, Net Worth, Height, Facts

Dedicated to her career, the former Boston Breakers player is yet to indulge in a public romance. Or perhaps, the prying eyes haven't sighted Alyssa with a potential spouse.

Whatever the case may be, whoever earns the title as Alyssa's husband will be the envy of the soccer world.

Alyssa's romantic life gets eclipsed by the bond she shares with her twin sister Amanda. With a mutual interest in soccer, the duo even attended a match at the 1999 World Cup. Alyssa Naeher brings sister Amanda as her date to a Broadway showing of Hamilton in 2018 (Photo:- Alyssa Naeher's Instagram)

Alyssa and Amanda are siblings with a sister named Abigail.

Boasting five feet and nine inches(1.9m) in height & 68 kgs in weight, Alyssa hails from Bridgeport, Connecticut. After earning a high school degree from Christian Heritage School in 2006, she enrolled at the Penn State University to study Kinesiology.