By LRU Writer | On: March 13, 2020
Amelia Heinle was seeking joint custody of the children and asked the court to...After ten years of marriage, Amelia and husband filed for divorce at Los Angeles Superior Court on...Amelia was married to the actor for a very short...The artist started her acting career at the age of 20 playing the... 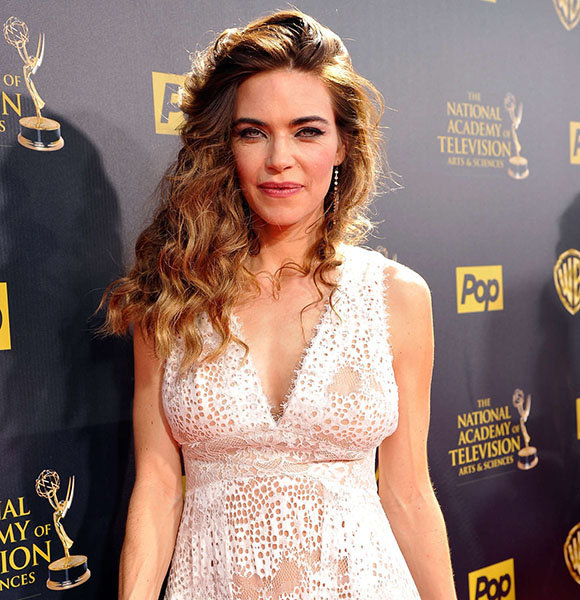 Actress Amelia Heinle is best known for playing the leading role in the TV show, Loving (1994-1995). Her role in the series led to her big win at the 1994 Soap Opera Digest Award in the category of Outstanding Female Newcomer.

After the actress ended her role in Loving, she landed a major role in another show, The Young & The Restless (2005-2020).

Her performance in the series gained major recognition as Amelia consequently won in the category of Outstanding Supporting Actress in a Drama Series at the 2014 and 2014 Daytime Emmy Awards. After the marriage, the actress and her husband, Thad, became parents following the birth of their son, Thaddeus Rowe Luckinbill; Thaddeus was born on 2nd November 2007 and weighed 8 pounds at the time of birth.

Likewise, on 17th December 2009, the pair welcomed their daughter, Georgia March Luckinbill, into the world.

After ten years of marriage, Amelia and Thad filed for divorce at Los Angeles Superior Court on 1st March 2017. As per court documents obtained by ToFab, they cited "irreconcilable differences" as the cause of the split.

Also, in the divorce petition filed by the couple, they were seeking joint custody of the children and asking the court to “reserve for future determination the issue of spousal support." As a result, the actress ended up getting a divorce with Thad in 2017.

Amelia was married to actor Michael Weatherly for a short period of time. The two tied the knot on 26th November 1995 and the union resulted in the birth of their son, August Manning Weatherly. Her son was born in 1997 and the same year, the CSI star got a divorce with Michael which was finalized on 28th November 1997.

Amelia (full name Amelia March Heinle) was born on 17th March 1973 in Pheonix, Arizona. She is the eldest among her five siblings.

The artist started her acting career at the age of 20 playing the role of Steffi Brewster in ABC's soap opera Loving (1993). Her talent along with her beauty was recognized in the media and she even named one of TV's Most Beautiful Women by Soap Opera Digest.