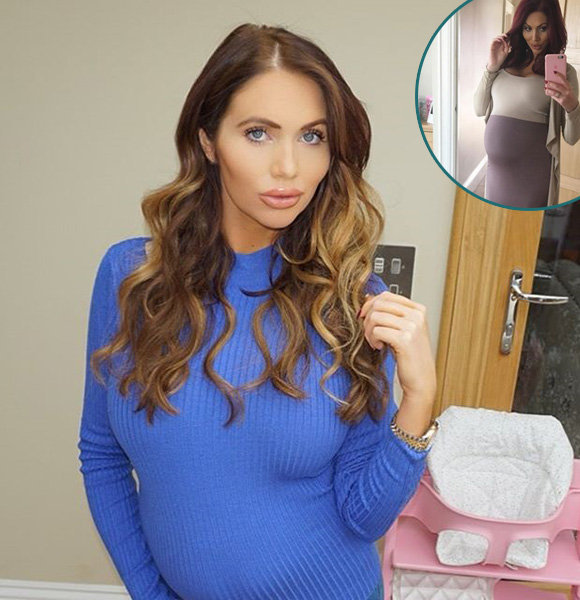 English television personality Amy Childs, known for her previous appearance in the first two seasons of the ITV2 series The Only Way Is Essex, has her name swirling around in the media relating to her personal life complications.

Turns out Amy is expecting her second baby with her new found love. Adding to it, she is facing complications to breastfeed her first-born, who is only a year old. She shared her first-born with her ex-boyfriend and is now looking forward to having a new member in the family any time soon.

The It's All About Amy star is already blessed with a child. She has a daughter, Polly, whom she shares with her ex-boyfriend Bradley Wright.

Amy, who stands at the height of 5ft 5 (165.1 cm), was previously in a loving relationship with Bradley. The couple had on and off relationship which eventually ended with a break-up. Amy first struck up a romance with Bradley back in 2013. In April 2017, Amy gave birth to her first-born, Polly. Only two months after the birth of Polly, Amy ended her relationship with Bradley after they broke off in June 2017. Amy revealed that their relationship ended because they fell out of love.

However, Amy moved on with her life as she found a new beau and is now expecting a child with him.

Baby Due With New Boyfriend

After the end of her relationship with Bradley, Amy moved on and gave romance another chance. Soon after she was rumored to be dating but back then she refused to reveal her mystery partner.

However, later she divulged that her new beau is a businessman who prefers to keep his life private and away from the hustle of media. Her new boyfriend goes by name Ritchie, who at the age of 39.

Amy, who has an estimated net worth of $5 million, met Ritchie back when she was just 16 and they were family friends. As he was just around the family circle they got talking a lot. Soon they started going on dates and not long after, Amy is expecting a second baby with him.

You May Also Like: Chloe Lewis Flaunts Sensual Romance With Boyfriend As Dating Escalates Rapidly

When the news of the pregnancy came, Amy and Ritchie had only been dating for three months and the news was a total surprise. However, Amy’s mom is much glad that she met with Ritchie and calls him the best thing ever happened to Amy.

Amy’s second child is due on 6 September. The pregnancy news was revealed by Amy through a post on Instagram in which she opened up about the happy news with her 548K followers.

Recently, Amy celebrated her baby shower as her due date is catching up with her.

English TV Personality The Only Way Is Essex Bradley Wright