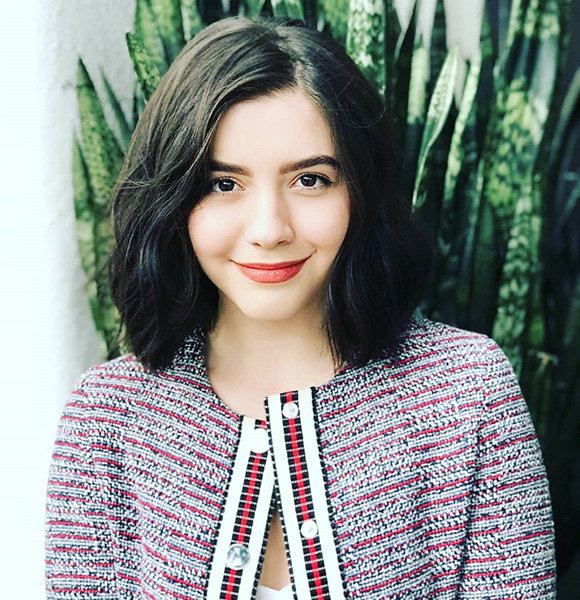 Canadian actress and singer Muazana “Ana” Golja (more popular with her stage name Ana) is well known for playing Zoe Rivas in the teen drama Degrassi and Degrassi: Next Class and Ariana Berlin in the TV movie Full Out. She even earned a Canadian Screen Award nomination for the latter in 2016.

Her acting debut was playing Lucy in 1-800-Missing at the tender age of nine. Amongst her other movies, Crazy for the Boys is the one on the 2019 watch list for her fans.

Is Ana Dating Anyone?

Ana is probably single and possibly not dating anyone at the moment. As her appearance with anyone that can be given her boyfriend tag is none, it is safe to say that the multi-talented actress is focusing on her career.

However, back in Ana 2017 was linked to her Degrassi co-star Ricardo Hoyos.

And before that, from 2013 to 2017, Ana was very much involved with her another co-star Eric Osborne, who portrayed Miles in Degrassi. Interestingly, Ana's onscreen first kiss was also with Eric, and soon their on-screen romance had turned into a real-life affair.

The duo kept their real-life romance low-profile till four years and then broke up without any public comments.

Another Degrassi Star:- Olivia Scriven: Eric as On-Screen Boyfriend, Who's She Dating Off-Screen?

Before Eric, Ana dated American actor Sterling Beaumon from 2011. Yet, the romantic relation also didn’t last long as they broke up in the same year.

Ana has always kept her personal life away from the prying eyes of media and the public. Her silence about her intimate relations has stirred some lesbian speculations in the past and continues to do so.

On top of that, Ana - portrayed as Zoe - kissed her female co-star Esme, portrayed by Chelsea Clark, two times in Degrassi. After the kiss, she even had an on-screen comment:

Kissing feels good with anyone.

The scene also fueled the lesbian speculations amongst her fans and media. But, Ana has not commented on anything regarding the rumors.

Ana was born to Albanian parents on 31st January in Toronto, Canada. She claims her mother to her role model. No doubt, the actress has a close-knit family. She never hesitates to showcase her mom and dad on any occasion like birthdays and vacations in her social media. She also posted on 2015 Father’s Day on her Instagram:

Happy Father's Day to all the dads out there, especially mine. Love you baba

Apart from her parents, Ana has an older brother in her family. Both of them share Spanish, Jewish, and Greek roots.No wonder Ana is fluent in Albanian.

Also, Ana of height 5 feet 3 inches (1.6 m) is a dedicated volunteer when it comes to community services and charities. She is involved with various charities, including Free The Children and We Days. Ana and her cast from Degrassi also traveled to Nicaragua and Ecuador, where they helped build schools and water filtration systems.