By LRU Writer | On: February 02, 2020
American actress Annaleigh Ashford is...also gained huge acclamation for...won a Tony Award for Best...is married to...wedding ceremony was an intimate...mother to a son, with her husband...to her baby...started acting professionally at age nine...also appeared in many TV shows like...appeared in movies like...at the height of 5 feet 4 inches (1.63 meters)... 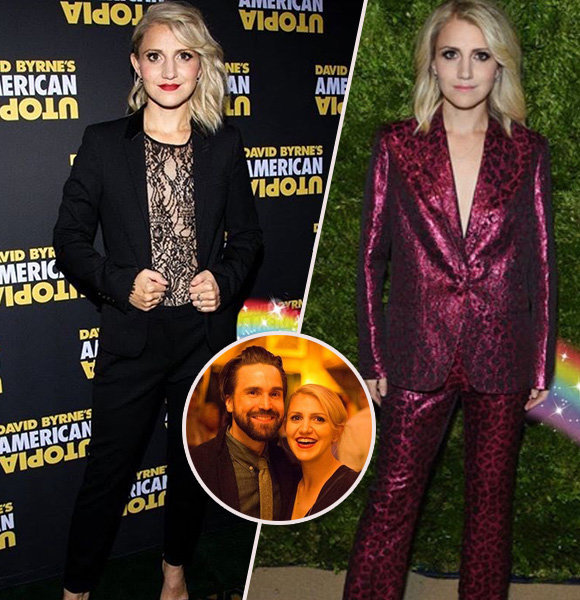 American actress Annaleigh Ashford is someone who has worn many hats throughout her career. She is an actress, singer, and dancer best known for her role as Margo in the Broadway version of Legally Blonde in 2006.

Further, she also gained huge acclamation for her portrayal of Essie in Broadway production of You Can't Take It With You. For her role in the Broadway play, she also won a Tony Award for Best Featured Actress in a Play in 2015.

Annaleigh is married to Joe Tapper.

Annaleigh and Joe first met in 2006, when Annaleigh's manager, Beth Rosner, introduced the two over lunch. From the first moment, the two shared a strong connection, and they started dating shortly after.

The couple tied the knot on 29th July 2013 at Devil’s Thumb Ranch in Tabernash, Colorado. The wedding ceremony was an intimate affair with close friends and family.

On her big day, the bride, Annaleigh, donned a light peach tube design gown whereas, the groom wore a classic suit.

He completed his Masters of Fine Arts from the prestigious Yale School of Drama.

Annaleigh is a mother to a son with her husband, Joe Tapper. Annaleigh started acting professionally at age nine. She made her big broadway debut in 2006 from the Broadway production of Legally Blonde.

After that, she has appeared in hit plays like Wicked and Kinky Boots.