By LRU Writer | On: August 01, 2019
American fashion designer and former actress, Ashley Oslen has long retired from acting. However, she always manages to get in the spotlight especially due to her relationships. Ashley is famous for dating older guys and has a long list of ex-boyfriends. Also, she has been linked to some high-profile celebrities. Her marital status has also garnered curiosity of the fans, who want to if Ashley is married or single. 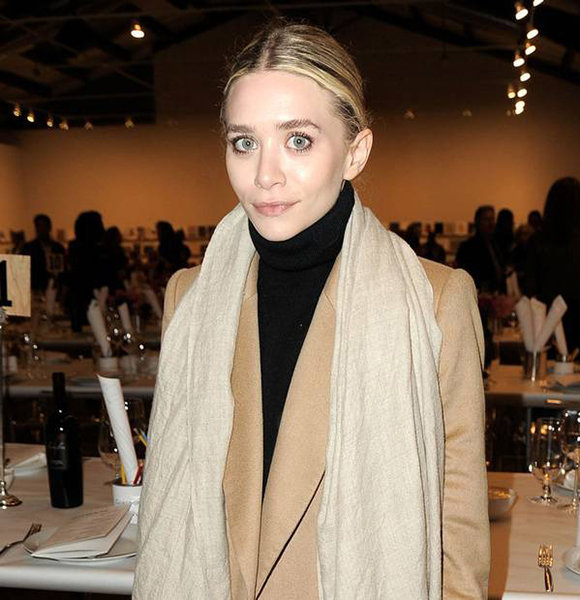 American fashion designer and former actress, Ashley Oslen has long retired from acting. However, she always manages to get in the spotlight especially due to her relationships.

Ashley is famous for dating older guys and has a long list of ex-boyfriends. Also, she has been linked to some high-profile celebrities. Her marital status has also garnered curiosity of the fans, who want to know if Ashley is married or single.

Ashley started dating early in her high school years. She dated her classmate Matt Kaplan for three years before finally breaking up in May 2004.

After her split with Matt, Ashley began dating nightclub owner Scott Sartiano, who is nearly 12 years older than her. The couple met in late 2004 through their mutual friend, actor John Stamos. The romance lasted for nine months after which the lovers went their separate ways.

In September 2005, the 33-year-old commenced her relationship with Tsubi jeans CEO Greg Chait. The pair remained a couple for more than a year and called it quits in January 2007 due to commitment issues.

Four years after her split with former boyfriend Matt, Ashley commenced a romantic relationship with actor Justin Bartha in May 2008. The pair was first spotted in the sets of the 2008 movie Hangover.

While they were dating, rumors grew that the couple was planning a $1 million wedding ceremony to be held in the South of France. However, the marriage never took place. A source revealed that although Ashley wanted to tie the knot, Justin was not ready to make a long-term commitment.

Ashley and Justin remained together for nearly three years and parted their ways in March 2011. An insider mentioned the reason for their separation as the hard-partying lifestyle of Justin, however, the rumor never got confirmed by both the parties. Justin later married fitness trainer Lia Smith on January 2014. Ashley and Justin attend an event back while they were in a relationship (Photo: Pinterest.com)

Post her breakup with Justin, Ashley started dating David Schulte, the CEO of Oliver Peoples, in 2013. Although the couple romanced for less than a year, they remained friends. David was also made the president of Ashley and her twin sister Mary-Kate's fashion brand, The Row.

More On Ashley's Brother:- Trent Olsen: Is he still Dating his Model Girlfriend? Married or Is Gay?

Ashley began her relationship with director Bennett Miller, 19 years her senior, in January 2014. They remained a couple for a year after which Bennett started dating actress Sienna Miller.

After her affair with the successful director turned unsuccessful, Ashley was linked with 58-year-old art dealer Richard Sachs in October 2016. Although their romance started off as rumors, the couple confirmed it by showing PDA at a New York Knicks game.

Unfortunately, the love didn't last long and the duo split in March 2017. An insider revealed that Ashley wanted to focus on her clothing line and didn't want to be tied up in a serious relationship.

Apart from her confirmed relationships, Ashley has also been linked to a couple of men older than her. The rumors of Ashley dating 14 years older Jared Leto spread in 2005 after the pair were spotted dining in LA.

In 2008, the two were captured again, this time holding hands and making out in LA. However, an insider dismissed the dating claims by saying they were just friends.

The  5 feet 3 inch (1.6 m) designer has also been rumored to have dated Johnny Depp, but their alleged affair never turned out to be true. Moreover, she has also been linked with artist George Condo in 2016. Allegedly, they broke up after a few months.

With a long list of lovers from her past, could it be that the American actress is finally ready to settle down?

Breaking the pattern by which she was known, dating older men, Ashley is in a relationship with the artist, Louis Eisner. The duo came out to the public at the end of 2017 after a few public sightings got her their fans curious. Having dated for almost two years, Ashley might have taken her relationship to the next level. In July of 2019, the internet was filled with the buzz of Ashley being engaged. The rumors started after she was spotted with a dark band on her ring finger.

As of now, neither Ashley nor Louis have confirmed anything on the matter. However, fans are betting their money on it as the rumors have impeccable timing. The news came right after Ashley's sister Elizabeth got engaged with her boyfriend Robbie Arnett after dating for three years.

Louis might just be Ashley's first husband. Only time will tell.