By LRU Writer | On: March 22, 2018
Aspyn Ovard, 21, And Husband Are Goals! Shares Stunning Wedding Ceremony American YouTube star, Aspyn Ovard is also known as a fashion and beauty expert. She is associated with her self-titled youtube channel and also runs a secondary channel with her husband whom she married not a long ago. She regularly demonstrates love towards her spouse through social media. So if you are intrigued to know more about her fascinating love life, then join us! 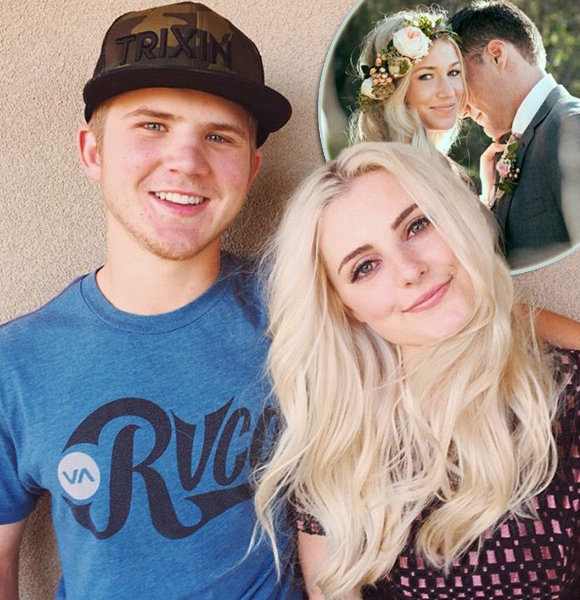 American YouTube star Aspyn Ovard is also known as a fashion and beauty expert. She is associated with her self-titled Youtube channel and also runs a secondary channel with her husband whom she married not a long ago. She further demonstrates love towards her spouse through social media, setting relationship goals for many people.

Join us if you crave to know about their married life and the goal they set for other couples!

Fashion diva Aspyn Ovard, who is 21 of age, and Parker Ferris first met in high school from where their romantic association initiated. Aspyn tied the knot to a YouTuber Parker later on 10th October 2015 after two months of being engaged.

Talking to People at her wedding, Aspyn thanked all her fans and supporters, stating:

Thank you for all the people that supported us.It’s really fun that we get to share this experience with everybody, so we’re just really grateful.

Their family and close friends were witnesses of the wedding that was held in outdoors in Utah. The couple later shared the beautiful moment on their respective Instagram account by posting stunning wedding pictures.

Aspyn's wedding picture on Instagram talked about the date and was further captioned as "Mr. and Mrs. Ferris." Parker also shared his happiness in being married and starting a new chapter of his life via Instagram.

The couple traveled various exotic sites like Bali (Indonesia), Maldives, Peru, Philippines and other places and even gave a glimpse of their travel via vlog on their collaborated channel. Their respective social sites are also filled with pictures reflecting the endearment.

The duo memorializes their bonding by sharing adorable pictures. In August 2017, Aspyn Ovard Instagrammed a picture of an engagement ring with her husband while celebrating their two years of engagement along with a love-filled caption.

Two years ago today on our balcony in Santorini, Parker made me a candlelit dinner and asked me to marry him â¤ï¸ Such a special memory!! I was so so so happy and excited to "officially" start our lives together ? Two years later we have grown and accomplished so much together! I love you babe! ? For their second wedding anniversary, they opened up to fans, sharing that they would like to become parents within the next two years via a video on their Youtube Channel.

They also revealed that they decided to buy property to build a new house through their videos, which is sure to be a whole new adventure in 2018.

Moving on to her professional life, Aspyn Ovard regularly produces beauty tutorials, Do-It-Yourself videos that cover several tips regarding makeup and outfit to wear on her self-titled YouTube Channel.

On the secondary channel titled Aspyn and Parker, they upload funny videos, vlogs and other videos of common interest. Besides, she runs her website consisting her vlog videos and all the information about fashion and beauty.

She also owns an online store, where a viewer can hunt for the newly released items that are available for sale and the news regarding latest fashions.