Actor Austin P. McKenzie Is Dating! Gay Boyfriend, His Ticket Out Of Closet?

By LRU Writer | On: May 11, 2018
The radar has now found a new romance; the romance of Spring Awakening actor, Austin P. McKenzie and Glee star Kevin McHale. Turns out Austin was romantically involved with his boyfriend for a long time, but their revelation came a year later after his boyfriend came forth with two big secrets; one of them being their dating life. 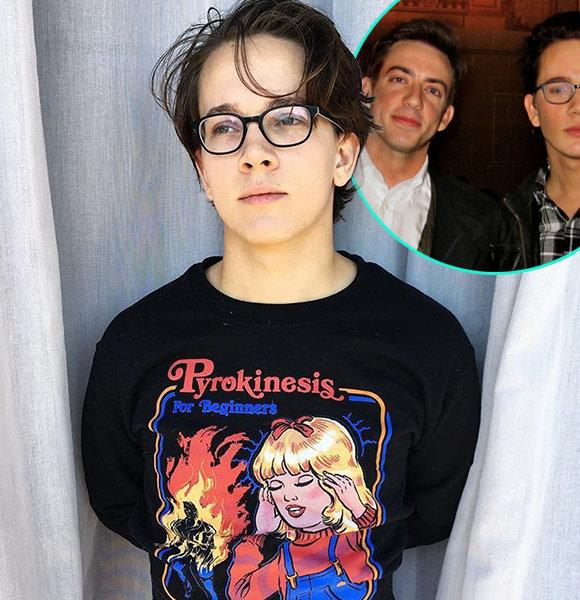 Celeb's talents are not the only thing that attracts limelight; their dating life is also on the constant radar!

And the radar has now found a new romance; the romance of Spring Awakening actor, Austin P. McKenzie and Glee star Kevin McHale.

Turns out Austin was romantically involved with his boyfriend for a long time, but their revelation came a year later after his boyfriend came forth with two big secrets; one of them being their dating life.

Wondering what the other part is? Well, you're about to find out!

The When We Rise star is deeply in love with his partner and has been romantically seeing openly gay Kevin McHale, the American actor, and radio personality.

Before the relationship got the "official couple" tag, rumors already speculated the duo as the couple. The speculation first began in March 2018 after his boyfriend Kevin, who recently came out publicly as gay, shared a snap of himself holding someone else's hand in his Instagram. The black and white picture depicted a supposedly male's hand and was captioned in American sign language with emoji that read "I Love You."

Except for the cryptic hand image, the pair was fairly silent regarding their relationship and had kept each other out of respective social media or interviews. Even if there were appearances on their social media, the pair made sure to hide any romantic gestures, that could lead to the revelation of their love life.

One of such instances was on 31 March 2018, where Kevin took to Instagram to share an image of him and Austin at a Los Angeles shelter. Via a beautiful caption, Kevin praised the Arizona native for his volunteering works.

And the couple later became partners for the music festival Coachella, held at the Empire Polo Club in Indio, California on 14 April 2018. The Glee star took to his Instagram featuring Austin cuddling with Kevin while he rested his head beside Kevin. He captioned the picture as, The Coachella partners were rumored to have started dating at around 2016.

Eventually, the pair finally confirmed their dating status in a Facebook Live talk with veteran journalist Marc Malkin on 10 March 2018. Austin's beau, Kevin opened up both, about his gay sexuality and their relationship at the interview. He disclosed the couple has been taking their dating life for over a year and a half.

Kevin also gave out the reasons for keeping his love life a low-key profile till date by stating,

"I wanted to protect the person I was with."

And, when Kevin was asked whether he and his boyfriend were looking forward to taking the next step in their relationship, Kevin responded being unsure of the answer. He said,

"don't know about that. Let's not get ahead of ourselves"

However, Austin's boyfriend kept the section of how their dating life sparked a secret.

As for now, their fans are surely looking forward to seeing them getting married and being parents someday. Austin and Kevin both appeared in When We Rise, Dustin Lance Black’s 2017 eight-part miniseries about LGBT rights.