By LRU Writer | On: May 19, 2019
Ayanda Thabethe is South Africa’s “it” girl. She is a multifaceted talent with  TV hosting, entrepreneurship, and modeling for top brands- L’Oreal Mizani Collection and Ponds-to her credit. Her top hosting jobs include shows; Top Billing on BET A-List & Top Entertainment...Ayanda’s Bio...Insight Into Dating Life With Boyfriend... 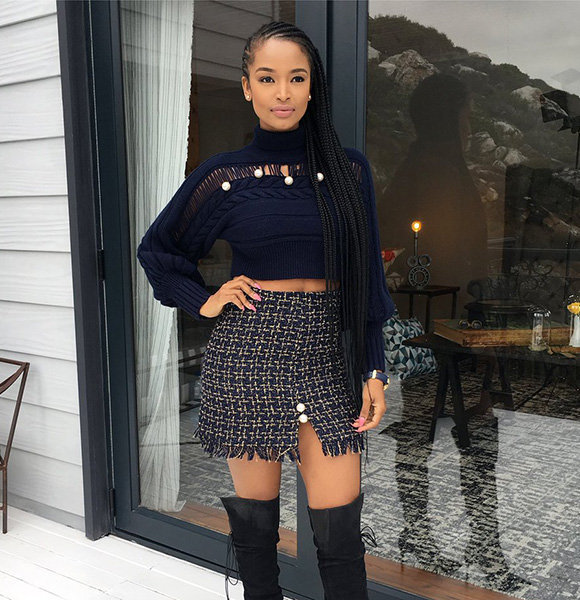 Ayanda Thabethe is South Africa’s “it” girl. She is a multifaceted talent with TV hosting, entrepreneurship, and modeling for top brands - L’Oreal Mizani Collection and Ponds - to her credit. Her top TV job includes the show, Top Billing on BET A-List & Top Entertainment.

The South African beauty was born on 18th March 1986. Growing up with four siblings, her mother worked three jobs to raise the Thabethe sisters. Well, the matriarch’s hard work paid off as Ayanda completed her education with a degree in Communications Management from the University of Pretoria in 2007.

Ayanda continued to make her parents proud with an Honors Marketing degree from the University of South Africa in 2011. Straight out of college, the lady with South African nationality founded Buzzworthy- a marketing agency.

Although the business was her brainchild, her ambitions in the entertainment sector needed a lot of self-belief and persuasion. Initially, her career in the show business wasn’t going anywhere as a casting director rejected her due to her short height of only 5 feet 2 inches ( 1.6m).

But, she didn’t give up and kept scouting for work until one casting director showed faith in her. Ayanda’s first ad with Sunsilk kickstarted her career in show business.

A significant celebrity since then, Ayanda also tried her hands in acting. She starred in South African drama series Rockville Season 4 as Aaliyah. She became a breakout star when the TV show hit the screens in 2016.

Her other acting credits include Generations Legacy and Tooth and Nails. Also, she was the face of Legit Fashion’s Limited Summer range 2016 as a model and also acted as the host of E! Africa.

Insight Into Dating Life With Boyfriend

Ayanda is an absolute beauty with brains and an accomplished young woman. Her dating profile is a topic of interest for a whole lot of people.

Well, she got married to fellow TV presenter Andile Ncube, but the pair filed for divorce just two years into the marriage.

Soon after, Ayanda got in a steady relationship with boyfriend, Zulu "Dash" Mkhathini- also a TV presenter. The pair was going secure in their relationship and were quite vocal about it. Ayanda and her man often gushed about each other in interviews and were considered the ultimate couple goals. However, before the multi-talented star could turn him into her husband, the couple broke up. The loved-up pair split in 2018 before they could celebrate their third anniversary. The TV host broke the news via Instagram Q&A when asked about her relationship status.

But, love wasn’t lost from Ayanda’s life as in May 2018 she was photographed with fashion designer Ty Hunter. Speculations were rife about the new beau in her life, but no confirmation came from either party.

As of now, the pretty star is married to her busy career, or at least she lets people believe that!