By LRU Writer | On: January 04, 2021
Wondering how these two people ended up falling in love with each other? Well, they did happen to share a common ground! But the question remains, could they hold on to their relationship for long? Dive in if you're curious to know their affair in detail! 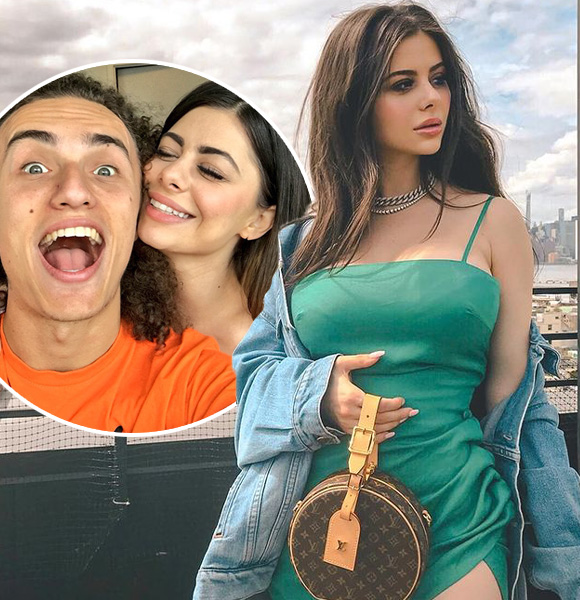 Love helps people find their soulmate even though they dwell a world apart. Canadian YouTuber AzzyLand can explain that to you better, as she too found love with her Dutch boyfriend, who was born and raised in a different environment from her.

Wondering how these two people ended up falling in love with each other? Well, they did happen to share a common ground! But the question remains, could they hold on to their relationship for long?

Dive in if you're curious to know their affair in detail!

AzzyLand was romantically involved with a man raised in different family background. She was dating a fellow YouTuber Kwebbelkop.

The duo met at the after-party of ‘E3,’ an annually held large gaming conference, and was introduced to each other by a common friend. Initially, the couple did not disclose anything about their relationship and kept their romance hush-hush.

However, the news of their relationship was leaked by a fellow YouTuber, John Scarce, and as of now, the couple openly shares their images on their respective social media accounts.

The couple started dating back in 2016. They celebrated their anniversary back in June (2017), and Azzy posted a picture of her sitting on her boyfriend's lap while he had his hands wrapped around her. They even took part in collecting donations for Early Life, which helps out Children’s Miracle Network Hospitals. They collected $5 or more from their fans who were willing to meet them and others interested in donating to the cause.

They were head over heels until rumors hit the internet that the couple had broken up. But the rumors turned down as per the YouTube video of her then-boyfriend Kwebbelkop.

In the video that was posted back in August 2018, Kwebbelkop clearly notified everyone that they had not broken up. However, faith had other plans for the couple.

After 3.5 years of dating, they had called it quits.

Azzy, on the other hand, has deleted the post that she shared on their anniversary back in 2017.

As of now, AzzyLand seems to be single.

AzzyLand's ex-boyfriend Kwebbelkop is also a YouTube sensation who has amassed over 14 million subscribers. And he is well-known by his YouTube channel name Kwebbelkop. However, his real name is Jordi van den Bussche.

He created his YouTube channel back in 2008 by did not upload anything until May 2011.

His channel features gameplay, reaction video, songs, and other entertaining content as well.

Born on 23 February 1991, Azzy Land's real name is Azra Bajrami. A Canadian by birth, Azzy grew up in a very different world than a normal girl does. Apart from girls who are interested in cutting off Barbie's hair, Azzy was much more amused by the graphics in the video games, which seems realistic to her.

Azzy, the gaming YouTuber, first got to know games from her family. She grew up watching her uncle and father play video games on NES, which fascinated her. She was bewitched by her first video game 'Metroid.'  Azzy owned her first game 'Legend of Zelda – Ocarina of Time' on her seventh birthday.

However, being a tomboy during her young age, Azzy got exposed to various games as she started hanging out with boys.  On the other hand, her mother often discouraged her interest in playing games, refocusing her to the world where girls played with dolls. Nevertheless, a mother is always a mother, and Azzy has got an overprotective one.

Despite that, she does appreciate all the hardships of her mom. On the occasion of Mother's Day in 2016, Azzy posted a picture with her mom on her Instagram wishing Happy Mother's Day. The caption of the image read:

"Happy Mother's Day to the strongest, most stubborn, and loving woman I know. I always give you a hard time for being so overprotective of me but to be honest, if you weren't, I don't know where I would be ? I love you! #happymothersday "

Azzy graduated from Wilfrid Laurier University, majoring in chemistry and biology. She was set to study medicine as her parents wanted; nevertheless, she focused more on her gaming and YouTube career.

However, Azzy first gained international recognization as a cosplayer while traveling around the world as an official cosplay guest to the conventions. She gained a lot of attention, which landed her job as the co-host of “Before They Were Famous,” a popular celebrity biography channel.

Later, she created a YouTube channel of her own where her career hit the jumpstart. She joined YouTube on 7 May 2015. Being pushed back and forth from studying medicine to traveling for her cosplays, she posted on her channel irregularly.