By LRU Writer | On: March 14, 2018
Big Brother’s Dan Gheesling And Wife Welcome Newborn Baby – Happiness Fall! The reality show star Dan Gheesling skyrocketed into the limelight after winning the 10th season of CBS's long-running show Big Brother. The reality personality, who also happens to be a football coach, has accumulated a vast fan following via his performances, and he knows well how to mesmerize them by sharing out his love-filled life. 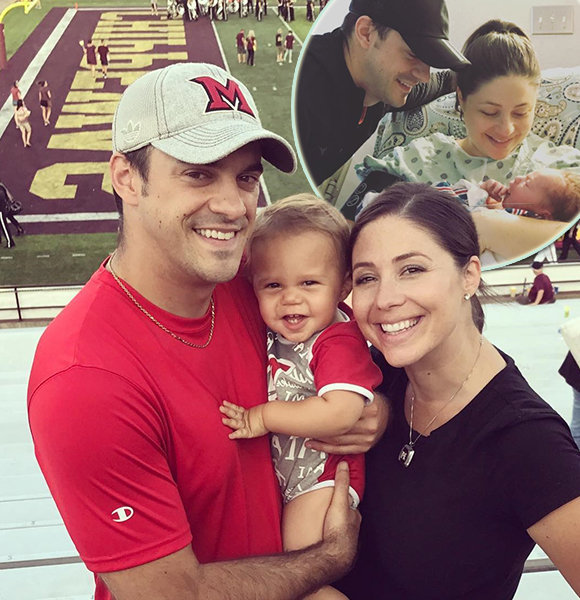 The reality show star Dan Gheesling skyrocketed into the limelight after winning the 10th season of CBS's long-running show Big Brother. The reality personality, who also happens to be a football coach, has accumulated a vast fan following via his performances, and he knows well how to mesmerize them by sharing out his love-filled life.

Interestingly, the time seems to have become jollier for Dan's fans and you (if you are one of them), as Dan has welcomed second child with his wife. Stay till the end if you wish to get acquainted with the baby along with the details of his blissful married life!

The handsome CBS personality Dan Gheesling is happily married to his girlfriend-turned-wife Chelsea Gheesling. The couple tied the knot back on April 2011 in the Shrine Chapel, the Campus of Orchard Lake St. Mary’s.

After five years of their bonding, the couple gave birth to their first child Desmond Daniel Gheesling in July 2016. Announcing the news out in the media, Dan Tweeted on his Twitter account as,

“Welcome to the world Desmond Daniel Gheesling, Your Mom and I love you so much.”

Dan had shared the excitement of having the first child some weeks before Desmond was born with the E-News on 3rd July 2016. There he revealed that he was very excited and also had so much respect for his wife for undertaking such physical challenge.

I think the best word is excitement and at the same time, I'm just doing my best to be a supportive responsible husband because what my wife is undertaking is a pretty big physical challenge. I definitely have a newfound respect for any new mom that goes through that because it's tough."

As for now, their family of three has evolved to be of four, as Chelsea has given birth to their second son on 13th March 2018, whom they named Miles Glen Gheesling.

Sharing out the news out to their fans, Dan uploaded a picture of the newborn and his wife on his Twitter and Instagram and via the caption said that everyone in the family loves him very much.

Welcome to the world Miles Glen Gheesling your Mom and I (and Des) love you so much! Moreover, Dan openly spoke about how he and his family was preparing to welcome Miles via an interview with the E-News. Saying that their son Desmond has already got hints on what's going on, Dan quoted that he thinks Desmond will be a good big brother.

"He is such a kind little boy and such a joy in our lives. We think he understands there is a baby coming when he points to mommy's belly and says 'bay-bee. As a family, Chelsea and I have been putting a lot of thought into how we exactly introduce Desmond to the new baby, as well as making Des feel a part of the process of adding another member to our family. I think he's going to be a great big brother!"

Moreover, Dan gushed about his wife and said that it's amazing to watch his wife manage everything perfectly.

"It's amazing to think how she does it all, and so well all the time. Chelsea is always so positive even when she is juggling 10 things at once. The pregnancy has been a little bit different because it is the second baby, so we have an understanding of what to expect throughout the process."

Furthermore, Dan quoted himself lucky to have such a supportive wife and revealed that parenting their children has been the greatest challenge of their life. Dan evidently has a beautiful family and its pleasuring to watch how his family grows stronger every passing day.

Besides spending jolly times with his family, Dan works as a Youtuber and is known for his gaming videos. Though the exact net worth of the star has not surfaced out in the media, it's quite obvious that he earns around $988 - $15.8K from his Youtube channel that has over 66K subscribers. Besides YouTube, the $500K that he won from Big Brother also adds up his net worth.