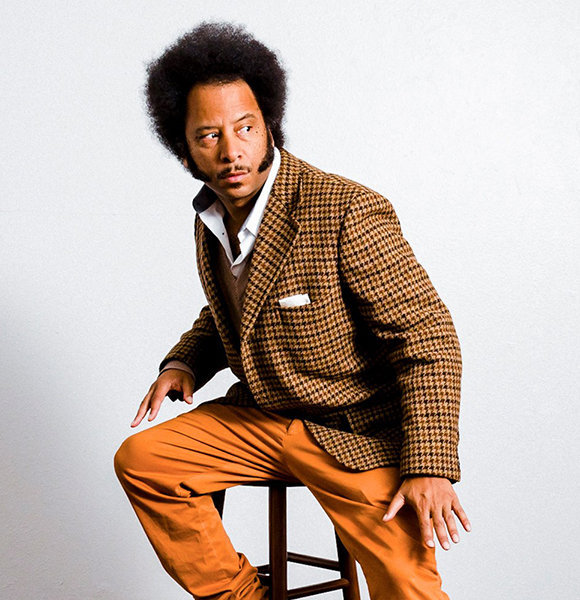 Boots Riley is an American rapper for The Coup, a band out of Oakland, California. The group - that formed in 1991 - quickly rose to fame after a record label signed them in 1992.

Growing up in the 80s, Boots’ work is inspired to expose the exploitation and racism through his craft. Whenever he is not busy with his entertainment career, he is also an activist and talks about capitalism and social justice.

With almost three decades in the entertainment industry, Boots has undoubtedly done well for himself; also donning a hat of a producer and director.

Boots Riley is an entertainer, to say the least. He is a man of many talents.

When he was at the age of 20, he founded his band The coup with his friend, Eric Davis. In 1992, they signed with Wild Pitch Records/EMI and released their first album Kill My Landlord in 1993. Two songs out of the collection received play on BET and Yo! MTV Raps.

Besides being a musician, Boots is also an actor.

He began his career in acting in 2008, portraying himself in the movie In Prison My Whole Life. He has since then lent his acting talent in many more like 99%: The Occupy Wall Street Collaborative Film in 2013 and Rope a Dope 2 in 2015.

Adding to his already impressive resume, he is also a director. He is now busy behind the screens with the responsibility of a director for his TV show, Sorry to Bother You. He also does the story writing and the music composition for the show.

So, it's no surprise that Boots has also been successful on the financial front of things.

Although his net worth is not public, it would not be wrong to assume he gets paid handsomely for his time, certainly more than the average salary of a film director, $112K.

Boots is a family man. He is in a relationship with wife-like-girlfriend Gabby La La.

The pair started seeing each other sometime before 2011 and have been together ever since. Interestingly, they have also become parents to a son, Django Lang-Rile. However, Gabby is not the rapper’s first partner. He was previously married to Katja Hubbard. The details of their relationship remain unclear but, their union did lead to the birth of a son, Nicos Hubbard-Riley and a daughter, Alina Hubbard-Riley.

Apart from the two kids, Boots also has a daughter named Xola Fischer-Riley. But, her mother remains unknown to the media.

Although the whole world knows him as Boots Riley, his real name is Raymond Lawrence Riley. He was born in the city of Chicago in Illinois, USA in the year 1971. Boots celebrates his birthday on the 1st of April every year.

Regarding his family, he had a rocky start in life.

His parents split while he was in high school. His mother, Anitra Patterson, left the family to work in Saudi Arabia. Due to which, he was raised alongside his brother, Manuel in East Oakland by his father, Walter.

Meanwhile, his father, Walter, was raising two kids with welfare checks and also working his way to get a law degree from the Golden Gate University.

No Longer Together:- Why Nikki Ferrell & Husband Split After 2 Years Of Marriage? Reason's Here

Despite the pressurizing situation at home, Boots completed his high school and joined a college to pursue his passion for arts. He studied Film at San Francisco State University.

With his active lifestyle; Boots is healthy at the age of 48. He stands at the height of 5 feet 7 inches (1.71 m) with normal weights to go along with it.