By LRU Writer | On: May 18, 2018
Brad Stevens is the head coach of 17 time NBA champions Boston Celtics. Taking the helm of the team in 2013 when the team was in transition, he has applied his philosophy to the side and has led them to conference finals twice already. The young coach, however, is determined to go one better and clinch the big one after disappointments in the preceding seasons. What's more, the coach who finds similarities in coaching an NBA team and raising a family is happily multitasking and balancing his personal life with his coaching job. 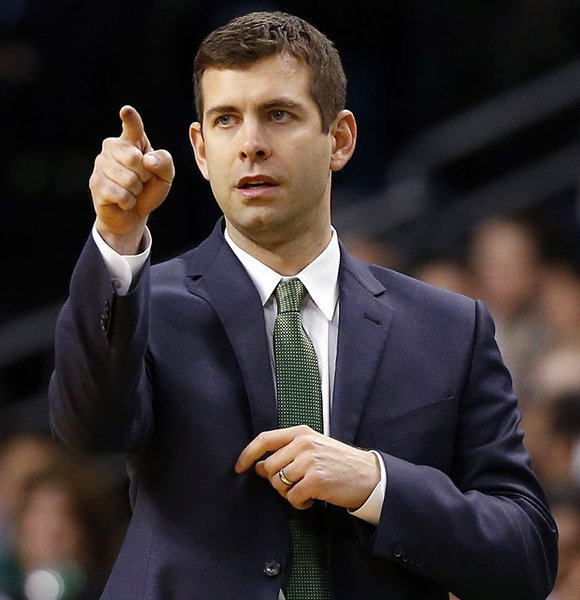 Taking the helm of the team in 2013 when the team was in transition, he applied his philosophy to the side and led them to conference finals twice.

The young coach, however, is determined to go one better and clinch the big one after disappointments in the preceding seasons.

The Indianapolis native, who finds similarities in coaching an NBA team and raising a family, is multitasking and balancing his personal life with his coaching job.

Giant Leap From Butler To Boston

Brad was an average basketballer during his college days, and after his graduation, he took up a job in the pharmaceutical sector.

However, the passionate basketballer jumped at the first opportunity to coach the Butler University as a volunteer. Gradually, Brad rose up the ranks from volunteer to assistant and assistant to head coach, where his talents came to be known to the outside world. Boston Celtics, the most successful team in the NBA history were going through a rebuilding job, and chairman Danny Ainge appointed Brad to lead the sleeping giants and make them great again. His first year with the franchise was all about getting to know the players and his record also reflected that. The Celtics that year had a forgettable record of 25-57.

However, Brad's coaching and shrewd acquisitions helped to improve the team's fortunes. With the team moving forward in the right direction, Brad's contract was extended in 2016, with his salary of $3.5 million a year substantially increased, to keep him away from other franchises.

With the signing of Al Horford and Kyrie Irving, the Celtics ended their regular season in 2017 with a record of 55-27, to finish as the second seeds in the eastern conference.

Brad's team swatted aside Milwaukee Bucks in the first round and then went past Philadelphia 76ers in the conference semis. And the celts boast a 2-0 lead over the LeBron James' Cleveland Cavaliers.

Brad, who enjoys a net worth of $6 million, had his share of bad luck with injuries to star players at different times. However, his team has never shied away and took the fight to the opposition.

This was evident in 2018's playoff first round when star player Kyrie Irving was sidelined through a knee injury. Not only did brad managed to keep his teams morale, but he also masterminded the teams' narrow victory, emerging triumphant against the bucks 4-3 in the seven-match series.

Brad's overall coaching record of 221-189 in the regular season and 16-20 in the playoffs with the Celtics, is decent enough considering the rebuilding tasks he had to go through and the number of injuries to star players at a critical time. However, the young coach has not only defied the odds, but he has also found a way to make his team competitive.

That is the reason Brad is considered to be one of the most brilliant minds in the NBA at present. And in an ode to his talent, Brad was shortlisted for the coach of the year along with Dwane Casey and Quin Snyder on 17 May 2018. And with a star line up on the field and brilliant mind on the touchline, Cleveland Cavaliers have got a match in the eastern conference.

It's not just basketball the coach is excellent in; he also is brilliant at shuffling his professional career with family life.

The young coach first met with his wife-to-be Tracey Evans at the high school. And it was sports that connected the couple, Brad was into basketball Bigtime, and Tracy played a little bit of football during her time in the high school. With both into sports, the pair got together and started dating.

After graduating in 1999, the couple got married in 2003 and are proud parents to two kids, son Brady and daughter Kinsley. Brad Stevens with wife Tracey Stevens and kids during an interview with Life Of Dad (Photo: lifeofadad.com)

And in an interview with Life Of Dad, Brad drew the similarities between coaching the NBA team and raising up his kids. He accepted that being a father was the best thing that could happen to anyone, and said being a father brought its share of responsibilities as being a coach. He affirmed:

An excellent father, a brilliant coach, and a dedicated husband, the adjectives to describe the super coach are running out.