By LRU Writer | On: March 08, 2021
Camille Kostek is a former NFL cheerleader and model...she got selected as one of the...is in a relationship with NFL star Rob Gronkowski...started dating since...boyfriend, Rob Gronkowski, is a former football...won the Super Bowls...a net worth of...at the age of...stands at a height of 5 feet 8 inches (1.73 meters)...her college education from...served as a cheerleader... 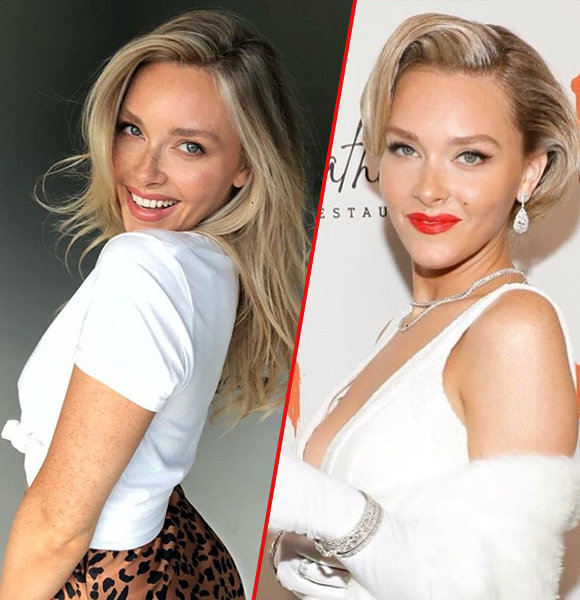 Camille Kostek is a former NFL cheerleader and model who rose to fame after winning the Sports Illustrated Swimsuit Model Search in 2018 and bagged a solo cover in her rookie year.

After that, in 2019, her fame doubled when she got selected as one of the Sports Illustrated swimsuit cover models alongside celebrated model Tyra Banks and professional soccer player Alex Morgan.

Further, Camille was also included in Maxim magazine’s Hot 100 list of Sexiest Women in the World in 2019.

Camille Kostek is in a relationship with NFL star Rob Gronkowski. The two reportedly started dating in 2015.

Both Camille and Rob were New England Patriots alum – one cheerleader and the other player. However, the two only connected after Camille resigned from cheerleading. On the occasion of Rob’s birthday on 15th May 2019, she wrote on Instagram, “time flies when you’re having fun spent this day with my birthday boy and forgot to post before the clock struck midnight. happy birthday to my best friend, my love, and my motivator.”

Her partner Rob also did not miss out on wishing her on her birthday on 20 February 2021. He took it to his Instagram and shared a picture with the caption, "Happy Birthday to my beautiful baby."

Just a couple of days ago, on Valentine's Day, the couple wished each other through their respective social media handle and Instagrammed beautiful pictures; Kostek wrote, my love, my friend, my valentine while Rob reciprocated the love with, "Happy Valentines Day to my baby. One of the hardest workers I know, always cheering me on, always caring, and always there for anything that I need!"

With over five years of dating, Kostek hinted on a possible upcoming engagement with her boyfriend, Rob. The model gave some words of advice to her 31-year-old boyfriend, saying, "I'm hoping that he's smart enough to ask my friends or my sisters before buying a diamond."

However, before this, the couple was focused on the big [Super Bowl] ring, which Rob didn't fail to bring it home; The Tampa Bay Buccaneers defeated the Green Bay Packers in the NFC Championship (2020-21), 31-26.

And now, with the Super Bowl ring in hand, the engagement ring seems no far from Rob's reach.

Camille’s boyfriend, Rob Gronkowski, is a former football star who is best known as ‘Gronk.’ In 2011, he set the single-season records for touchdowns (17) and yards (1,327) by a tight end for his team New England Patriots.

He also won the Super Bowls XLIX, LI, and LIII with the New England Patriots.

After an amazing football career for two decades, Rob announced his retirement from the sport on 25th March 2019.

According to Celebrity Net Worth, his football career has rendered Rob a net worth of $40 million.

She was born as the oldest of four kids to a contractor father, Alan Kostek, and a gym manager mother, Christina née Decosta.

She adores her parents and never shies away from flaunting her love for them. On the occasion of fathers day, she shared a series of old pictures with her dad Alan Kostek and expressed her love for him.

Well, we have not come close to know much about Kostek's dad, but through this post, we are pretty sure that Alan Kostek is a supportive, hardworking, and humble man.

According to Cheatsheet, Camille’s career in modeling has rendered her a net worth of $3.4 million. And her partner Rob Gronkowski has a net worth of $45 million with a salary 0f $9 million.