By LRU Writer | On: January 15, 2020
Luke Kuelchy is married to Shannon Reilly...married his then-girlfriend shortly after their first meeting in 2012...with his wife...Luke and Shannon both are career-oriented people...both are absent in social media...when they started dating...their relationship...helped the Panthers reach the Super Bowl 50 in 2016...was getting drafted into the NFL... 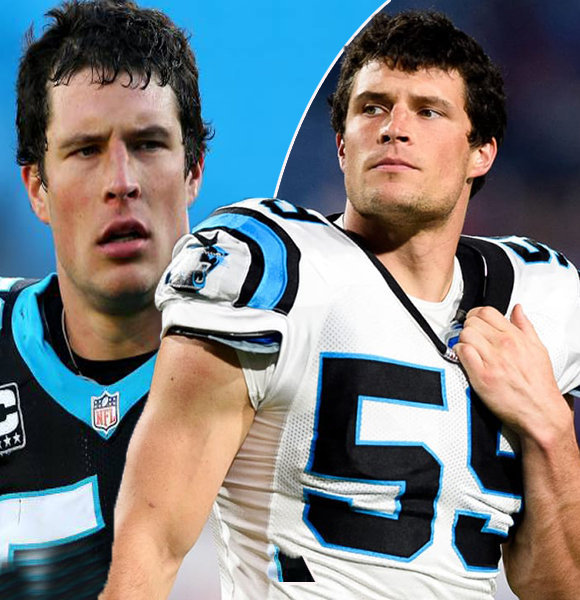 Luke Kuelchy is a former middle linebacker for the Carolina Panthers of the NFL. He graduated from Boston College. He made his debut for the Panthers in 2012 after being selected in the 2012 NFL Draft as the 9th pick in Round one.

Since his debut, he has achieved a lot in his career. He was selected in his first Pro Bowl and All-Pro teams in 2013. Luke also helped the Panthers in reaching the Super Bowl 50 in 2016.

Luke has been with his longtime girlfriend and wife, Shannon Reilley, from around 2012. They got to know each other during the same time he was getting drafted into the NFL in 2012. Luke married Shannon sometime after they started dating, and have stayed that way for many years.

Both Luke and Shannon are not active much on social media. Shannon’s Twitter age is private, and her Facebook page doesn’t reveal much information about her private life.

Shannon was raised alongside five siblings and is the second of the six kids in the family. She has three sisters: Maddy, Shauna, and Marion, and two brothers: Tommy and Matt Reilly.

Shannon graduated from the prestigious Saint Ursula Academy in 2010. She played lacrosse during her time in school, specifically from the sixth grade, and also played club field hockey.

After her time at Cincinnati, Shannon went to Gardner-Webb University, where she got her Master’s degree in Physician Assistant Studies in 2017. In addition to this, she spent her junior year of Masters’s level studying in Copenhagen, Denmark.

Shannon is a career-oriented person, just like her husband.