Carl Quintanilla Talks About His Much Speculated Ethnicity, Wife Judy Chung and Their Lovely Children

By LRU Writer | On: August 09, 2018
One of the Emmy Award-winning reporter Carl Quintanilla is an American journalist who is working for CNBC. He was an anchor of CNBC's Squawk on the Street, Squawk Box, and Squawk Alley morning programs formerly. He has also served as an NBC News correspondent based in New York and Chicago. He has substituted on both the NBC Nightly News and the Today Show. 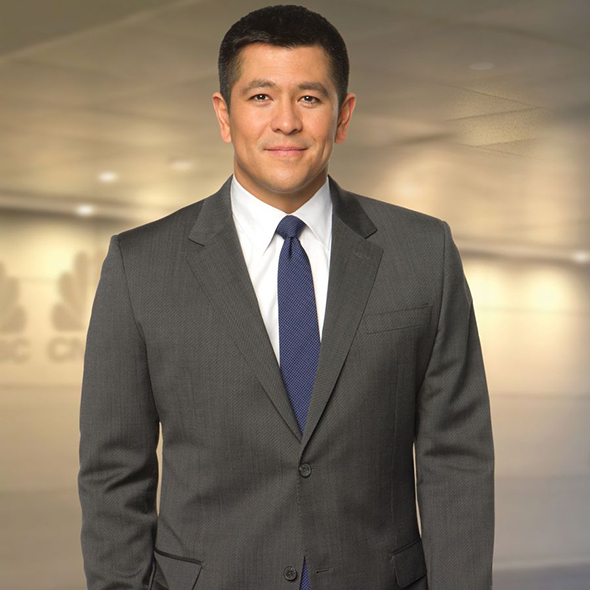 It wouldn't be an arduous task for CNBC viewers to recognize him.

The American journalist Carl Quintanilla, known for his journalism and media career, is an Emmy Award reporter. He is known for his anchoring and co-anchoring the CNBC's morning programs, Squawk on the Street and Squawk Alley.

Besides his incredible media journey and recognization, he was also well-benefitted by his job as he found wife-like-figure in the show producer of CNBC and MSNBC  show. So, looking deep into his personal life, he has a beautiful family to get back to after a long day's work.

Wife And Children Of CNBC's Carl:

Carl Quintanilla tied the knot with a former producer for the "CNBC and MSNBC" show, Judy Chung, in 2005. The couple welcomed their twin daughters: Ava Jane, and Lily Anna, in 2009.

Related To "CNBC":- CNBC's Julia Boorstin Wiki: A Bio Ranging From Age to Her Lessons with a Baby

After the birth of the twin-daughter, a first-time parent, Quintanilla expressed his joy to TVNewser in 2009 quoting:

“I can only say it’s everything my friends and family have described - times 1000." Even the professional husband and wife are busy fulfilling their respective schedules, they have been able to look after their children wisely. The 45-year-old talented journalist is living a prosperous life with his family. He shared a picture of his girls on the occasion of his wedding anniversary which coincidentally happened to be his daughter's birthday as well.

As the family is growing with his two little angels growing, the American journalist purchased a lavish Hampton house in Bridgehampton in the Barn & Vine neighborhood. He, along with his wife, are the former CBNC and MSNBC producers.

Judy Chung now works for Ralph Lauren, bought the house for a whopping sum of $3.2 million, according to the development’s real estate firm. The house is spread in the 4,269-square-foot lot and has seven-bedroom and 6.5-bathroom.  The Michigan-born American journalist

Well, the couple has added another hefty property, and it seems the couple is going strong with their more than a decade of the married relationship. And to the date, the foul news about the couple getting divorced has not witnessed and heard. So, it appears that Carl is having a good time with his wife and children and shares a strong marital bond.

"Squawk on the Street" Anchor's Ethnicity With Career Highlights:

Born on 10 September 1970 in Michigan, Carl graduated from the University of Colorado Boulder in 1993 with a Bachelor of Arts degree in 'Political Science.' Carl, who has successfully kept his personal life inside the mystery box, is reported to be of Asian ethnicity, who follows Buddhism.

He has earned both recognition and awards through his mountainous hosting skills. Till date, he is estimated to have piled up total net worth amount of 2.5 million dollars.

He went on to work in Journalism for Boulder Daily Camera,  National Public Radio in Washington D.C., The Wall Street Journal and eventually, CNBC. Always known for being dedicated to his work, he received an Emmy award as well as a Peabody award. His latest well-known Jig was as a Republican CNBC Debate moderator for the 2016 US presidential election in October 2016. Carl Quintanilla alongside his coworkers interviewing American President (as of December 18, 2016) Donald Trump

Emmy Award-winning reporter Carl Quintanilla is an American journalist who is working for CNBC. Previously, he served as an NBC News correspondent based in New York and Chicago.

Carl has substituted on both the NBC Nightly News and the Today Show. He is also busy as one of the principal anchor of CNBC's "Squawk on the Street."  He is also a co-anchor of  "Squawk Alley," along with Kayla Tausche and Jon Fortt.

The co-anchor of CNBC recently did news about the president Trump's tariffs on its neighbors: Canada and Mexico. Also, lately he has been reporting on the tweets of America's President Donald Trump's tweet.

Aside from hosting the shows, Carl reported about the response of the President Trump's Tweet on June 2018, that reads the New York Attorney General is suing the president, his family, and the foundation. Also, on 26 July 2018, he reported that President Trump has tweeted about sanctions against Turkey over the detainment of North Carolina pastor Andrew Brunson.

Carl, not only reports the tweet of President Trump but also he talks with the restaurant moguls on his show, Squawk on the Street. He took the interview with the McDonald's CEO and President SteveEasterbrook to discuss McDonald's official new corporate headquarters in Chicago.

He further described that the restaurant is going through some big transitions which include their menu, marketing, store design, and technology.

Sqwak on the street CNBC