By LRU Writer | On: July 22, 2018
Chelsea Kilgore has garnered the fame mostly as the wife of a famous sportsperson, J.J. Redick. With her identity was initially overshadowed by her husband's fame, fans finally realized that this WAG played an essential role in her spouse's successful career. From getting married privately to welcoming children, Chelsea has been a major part of J.J. Redick's life. 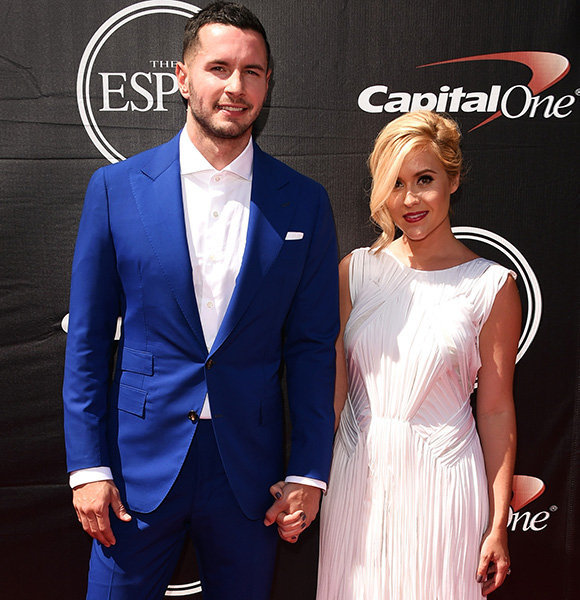 Chelsea Kilgore has garnered the fame mostly as the wife of a famous sportsperson, J.J. Redick.

With her identity was initially overshadowed by her husband's fame, fans finally realized that this WAG played an essential role in her spouse's successful career. From getting married privately to welcoming children, Chelsea has been a major part of J.J. Redick's life.

Learn about the married life of Chelsea along with her wiki details and other related information.

Chelsea married American professional basketball player, J.J. Redick in 2010. The couple wed after dating for two years during which J.J. had turned into a born-again Christian.

They tied the knot in a private event attended by close friends and family members. Not much about the wedding has been revealed except for a picture where Chelsea is presented to J.J. by her father. Chelsea on her wedding day with her father in 2010 (Photo: Fabwags.com)

Further, Chelsea is careful about her husband's social status and doesn't want him to act irresponsibly in public. Redick said in an interview,

The couple welcomed two beautiful children from their marital union. Their eldest son, born in August 2014, is named Knox after the band Knox Hamilton, whereas their second child, who was conceived in August 2016, is called Kai. J.J considers his wife to be his earthly rock, who has remained solid with him during his thick and thin times. The pair loves traveling to different locations and trying different foods items of those places of which Milwaukee, Wisconsin is one of their favorite destinations.

Further, they also enjoy spending their free time as a couple. J.J revealed in an interview with orlandosentinel.com on January 2013 that if he got a day off from work, he was obliged to spend it with Chelsea unless she would want to do something that's not good for J.J,'s well-being. He said,

"I have a general rule that if I have an off-day during the season that I owe it to her to do what she wants unless it’s harmful to my well-being."

Chelsea, age 31, has always been supportive of her husband professional life and has even helped him excel at his basketball career. J.J. has been prospering financially after he got married to his longtime lover. In 2014, four years after their wedding, J.J. signed a contract with the Los Angeles Clippers for a massive amount of $27 million.

Chelsea also shares her husband's net worth of $26 million. The couple, who previously lived in a lavish Texas Mansion, sold their home in 2016 for an amount of $5 million.

Daughter of John and Robin Kilgore, Chelsea has not disclosed much about her family but is close to her twin sister Kylee Redick who works and lives in New York.

Chelsea considers her beau, sister and herself to be three besties; and has even flaunted their chemistry on social media. On 24 November 2013, she posted a picture of the trio calling them "the three best friends." Chelsea, who works as a Pilates instructor, celebrates her birthday on 12 May every year. As per Player Wives, J.J.'s wife helps in running the J. J. Redick foundation, an organization established in 2011 in order to “help teach children how to play basketball through youth clinics the clinics will be designed to reinforce fundamentals of basketball and to encourage young people through sports.”

Even though her origin has not been revealed yet, Chelsea describes herself as “Pilates Instructor. Identical twin. Amateur Chef. Wannabe runner. Lover of live music. Haver of husband. NYC, Orlando, and now Austin” as per her now-deleted Twitter account.