By LRU Writer | On: July 26, 2021
Former world number one tennis player Chris Evert, who won the Grand Slam championship every year from 1974 through 1986, offered some thoughts on this year's Wimbledon.... she has won eighteen...not married as of now...been married in the past...was married to...got married...shares a strong friendship with...dating fellow tennis player... the wedding was set for November but was suddenly called off...mother to three kids...was born... 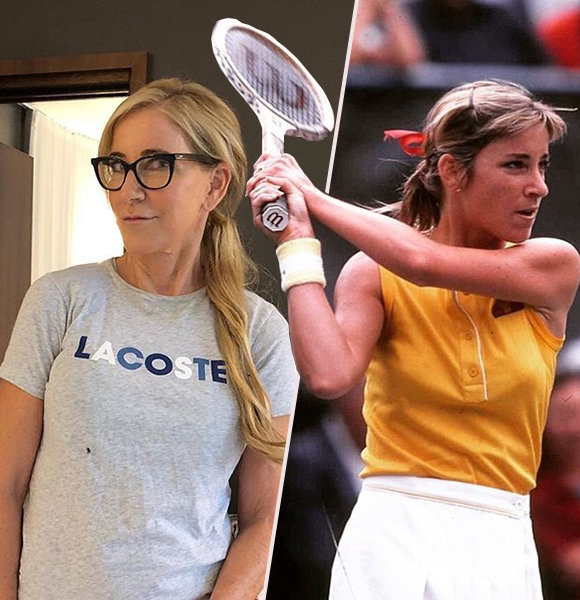 With an illustrious tennis career under her belt, Chris Evert is one of the most accomplished athletes in the sports scene. She was, without a doubt, the puzzle's missing piece, falling into place perfectly.

Recently, the former world number one tennis player who won the Grand Slam championship every year from 1974 through 1986 offered some thoughts on Wimbledon 2021.

Chris Evert Being Probed About Wimbledon

When she retired in 1989, she was still in her mid-thirties. Her last official match was the 1989 US Open, where she was defeated by Zina Garrison. Even though she was physically healthy and strong, she found it difficult to get through the early phases without much mental work.

She even told the New York Times about it.

“Until this year I always had the feeling that I was going for the grand slam tournaments and that I had a chance to be No. 1. But this year I felt, 'Well, it's tough,' and I didn't want to make that emotional commitment, and even if I did, I knew there'd be no guarantee.”

But today, Evert has been working as an ESPN analyst since 2011 and will continue to do so in the future. She enjoys studying and analyzing players' every move and plan.

In the same spirit, she spoke with reporters about Wimbledon on a conference call, complimenting Roger Federer and Serena Williams' skills. Furthermore, when questioned about Federer's exit this year, Evert was shocked. According to her, the player seemed 'weary' in his Wimbledon quarter-final.

But it didn't stop the athlete from praising both players, saying that their strength gave them the best chance on grass.

As a big-name player in her own day, she now describes how difficult it is for other players to deal with social media usage since their lives have become so open, and they require wide ears to prevent being offended.

She may believe this since the public's attention is now focused on her private and intimate matters as well. They are constantly on their toes, no matter where she is or with whom she shares her love.

Who Is Chris Evert Married To?

Currently, the former player is not married. She has, however, had her share of unsuccessful marriages. She's been married before, three times to be exact. Between 1979 to 1987, she was married to John Lloyd, a tennis analyst, and pundit.

After Lloyd, the retired player got married to American ski champion Andy Mill on 30th July 1988. But after eighteen years as a married couple, their relationship eventually hit rock bottom, and they got divorced in December 2006.

Even after the divorce, she shares a strong friendship with Andy, and the two are often seen together on various occasions. After her second marriage, she got remarried to a professional golfer Greg Norman on 28th June 2008. But the marriage lasted only for eighteen months, and the two got divorced in December 2009.

When asked about her relationship with Norman, she said that she had always assumed that her love for him would continue forever but that they were very different people.

She had spoken candidly about her broken marriage during a conversation with Elle.

"Was there passion? Yes. Was there love? Sure, uh, yes—but we had two big worlds. Honestly, we had different priorities. I want roots—I want to be with my kids, live in a nice, comfortable house, and be able to do my work. One of us would have had to give up a big part of our life.”

The athlete had been baffled by three failed marriages to the point that she sought counseling. Although she has no partners at her side, the former player does have her children, whom she walks with through thick and thin.

The tennis player is a mother to three kids, with her second ex-husband Andy Mill.

Her eldest son Alexander James was born on 12th October 1991, her second son Nicholas Joseph was born on 8th June 1994, and her youngest son Colton Jack was born on 14th June 1996. She and her ex-husband Andy co-parented their three sons even after their divorce.

When it comes to children, she has had several claims, too, which were brought against her by a fellow tennis player while they were together.

When she was just getting started with her career in 1972, she started dating fellow tennis player Jimmy Connors.

Their relationship soon started making headlines, especially after both of them won singles titles at Wimbledon in 1974. The same year, 19 years old, Evert got engaged to Connors. Their wedding was set for November but was suddenly called off.

Nothing was disclosed at the time, but in 2013, Conners published his biography titled The Outsider. He hinted that the former tennis player got pregnant in their relationship and had an abortion without consulting him. He also implied that was the reason behind their failed relationship.

More About Chris Evert Net Worth

Christine Marie Evert was born on 21st December 1954 in Ft. Lauderdale, Florida, USA. Her father, a tennis pro himself, started training her at age five.

When she graduated from St. Thomas Aquinas High School in 1973, she was voted "Most Likely to Succeed."

Standing at the height of 5 feet 6. 25 inches (1.68 meters), she made her Grand Slam debut at age 16 in a1971. Evert even served for nine years as the President of the Women's Tennis Association.

She has won eighteen Grand Slam singles titles throughout her career, including six U.S. Opens and seven French Opens. Evert was also awarded the Sexiest Female Athlete by PEOPLE magazine in 1980, and she was unanimously admitted into the Tennis Hall of Fame in 1995.

Aside from her tennis accomplishments, the athlete has starred in films and television shows such as Trainwreck (2015), Wimbledon (2004), and CSI: Crime Scene Investigation (2000).

Looking at the former world's number one tennis player’s career, she must have accumulated a net worth of over $10 million.