By LRU Writer | On: April 15, 2019
Former glamour girl Danielle Llyod, age 35, is now a married woman...Days after announcing the secret wedding to her fiance of three years, Michael O'Neill, the "Emerald Cove -The Tale of Dougie Woodbridge" star finally shared the details of the nuptials... 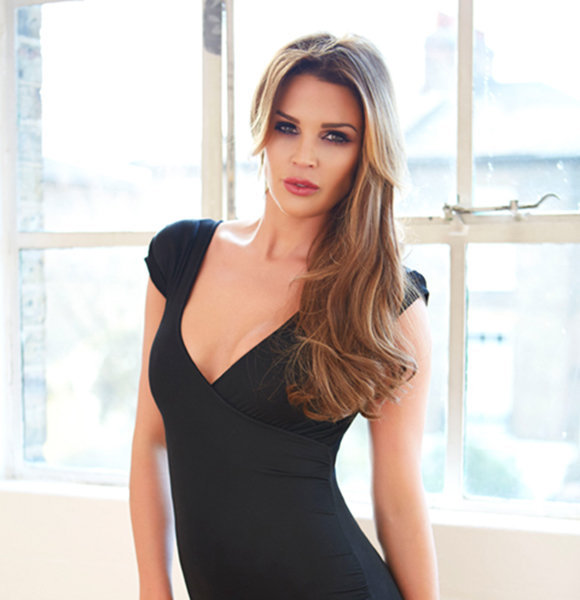 Days after announcing the secret wedding to her fiance of three years Michael O'Neill, the "Emerald Cove - The Tale of Dougie Woodbridge" star finally shared the details of the nuptials.

On 15th April 2019 - in an exclusive interview with OK! Magazine - Danielle revealed that she and her now-husband Michael got married on 6th April 2019 in front of the iconic Burj Al Arab Jumeirah in UAE. Newlyweds Danielle Llyod and her husband, Michael O'Neill pose for a photo on the big day circa April 2019 (Photo:- okmagazine.com)

On the wedding day, she wore a stunning strapless white gown with a ruffled train. Meanwhile, her groom looked dapper in a black suit. For the honeymoon, the newlyweds opted to travel to the Maldives.

After the wedding, the 35-year-old briefly spoke on her past relationships while confessing to having wedding blues on the big day. Since the ceremony, she claimed to have cried every day because of how perfect the event was.

According to the Liverpool-England native, her marriage to Michael was unlike anything she had experienced before.

Archie, Harry, and George - children Danielle shares with ex-husband - played an integral part of the wedding. While the first two served as best men, the latter was the designated ring bearer.

Danielle and her electrician husband Michael O'Neill deem their only child, Ronnie, too much of a baby, to have a role on the big day.

The married duo welcomed their first bundle of joy, Ronnie in September 2017. A close source revealed the news of them being pregnant in an exclusive interview with The Sun.

More On The Pregnancy:- She's Pregnant! Beautiful Model Danielle Lloyd is Expecting her First Child with her fiancé Michael O'Neill

The news had come little over a year after the couple got engaged. Before the engagement, the former Playboy model and her husband enjoyed six months dating phase.

Following the wedding, Danielle shared that she and Michael are contemplating to extend the family - preferably a baby daughter through adoption and by the end of 2019.

Between May 2012 to December 2014, the Cut actress was in a marital relationship with a footballer-cum-talent agent, Jamie O'Hara. Per reports, the former divorced the latter after learning about his cheating ways.

Nevertheless, the former lovebirds' romance was a successful one. After all, it yielded three kids - Archie, Harry, and George aged eight, seven and six respectively.

Despite the caustic nature of the divorce, Danielle and her ex-husband Jamie now seem to hold each other in high regard.

Who Is Danielle Llyod?

Born on 16th December 1983, Danielle is a native of Liverpool, England.

Fellow Liverpool Native:- Soccer Player Mark Lawrenson's Married Life: All You Need To Know About His Wife And Divorce Issues

She rose to prominence after she famously got stripped of the Miss Great Britian crown in 2006 after posing nude for the adult magazine Playboy. She also got accused of having an affair with Teddy Sheringham, who was one of the judges at the competition.